A FATHER and son have admitted breaching the peace after confronting a 22-year-old man who was ringing their doorbell in the middle of the night. 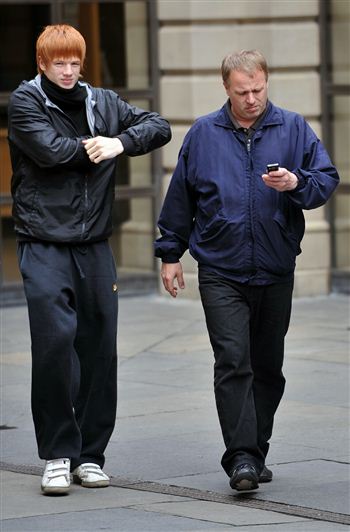 Derek Spence, 45, claims his girlfriend’s autistic child was being disturbed by pranksters ringing the doorbell at the Edinburgh flat where he was staying.

Spence, along with his 17-year-old son Owen and another person spilled out onto the street after the 1am wake-up call.

There they confronted John Donoghue, 22, who they believed was responsible for the nuisance and a scuffle ensued.

A nearby chip-shop owner saw the struggle and alerted police and Mr Donoghue complained to police after being seen in hospital.

Spence senior claims that the incident was the latest in a campaign of annoyance.

But at Edinburgh Sheriff Court he, along with Owen admitted struggling with Mr Donoghue and causing a breach of the peace.

Fiscal depute Aidan Higgins told the court how Spence senior had been staying with his new partner in her Warrender Park Road home on August 30 last year.

Mr Donoghue and a friend had been with girls nearby and Spence and his family were woken by a ringing doorbell.

Mr Higgins said: “It would appear that Mr Donoghue and a friend were in the company of a couple of young ladies. They had made their way down the common stair and that they had rung the door bell at the flat where the two accused were sleeping.”

Spence senior, Owen and another, who cannot be named for legal reasons, came out the flat and quickly spotted Mr Donoghue across the road at a nearby chip shop.

The third person went to speak to Mr Donoghue but became involved in an altercation and was followed by Owen Spence.

However, when he too became involved in the struggle, Spence senior also joined the melee.

Mr Higgins said there was a brief struggle which was witnessed by passers-by and reported by the chip shop owner.

When police arrived Mr Donoghue was gone but made a complaint the next day going to hospital.

Police then interviewed Spence senior and Owen and they also described a similar stand-off.

Spence senior’s solicitor, Jim Stephenson, said the incident had been the latest in a long line of people ringing the bell in the early hours.

He said: “This was not the first incident that the door bell had been rung early in the morning.”

Mr Stephenson said Spence senior’s girlfriend had an autistic child who was difficult to keep in a stable sleeping pattern.

He added that Spence senior had been a self employed plasterer until becoming depressed over the breakdown in his marriage two years ago.

She deferred sentence on Owen Spence for three months for him to be of good behaviour.