Dolly the sheep creator Ian bows down to the Queen

THE boffin behind Dolly the Sheep said he was “delighted and excited” after getting a knighthood from the Queen.

Professor Ian Wilmut is now a Sir for his work creating the world’s first cloned mammal in 1996. 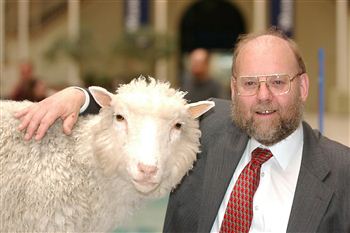 He picked up his honour from Queen Elizabeth II at Holyrood Palace in Edinburgh today (Tuesday), just a few miles from the lab where he conducted his breakthrough experiment.

The award came a week before his 65th birthday.

After taking in the Royal garden party his family, Sir Ian dedicated his award to the colleagues he researched with.

He said: “I’m naturally delighted and excited by this award and accept it on behalf of the teams I work with now at the centre for regenerative medicine at the University of Edinburgh and previously at the Roslin Institute.
“It also recognises the importance of biomedical research to develop new treatments in regenerative medicine.”

His honour for services to science comes 10 years after he picked up an OBE in light of the Dolly experiment, which shone a light on stem cells and their potential value in research and medicine.

He began working at farms at weekends aged 14 before studying agriculture at Nottingham University and expected to become a dairy farmer.

But a summer holiday working in a science laboratory led to a lifelong interest in embryology.

He was among a host of dignitaries picking up honours in the capital yesterday, including entrepreneur Sir Tom Farmer, Grampian Police Chief Constable Colin McKerracher and Dr Isabel Bruce for services to education in Scotland and Malawi.

Dolly The Sheep institute under fire over contaminated burn

Penguins p-p-p-pick up a pebble