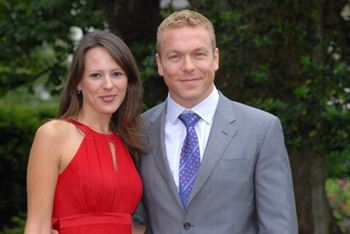 SIR Chris Hoy was back in his home town yesterday to pick up a prestigious award – but his beautiful fiancé stole the show.

Gorgeous legal eagle Sarra Kemp stunned onlookers wearing a flowing red dress as she stepped out with the Olympic hero.

Hoy, 33, whisked devoted Sarra to Prague during the last Easter weekend after proposing with a stunning diamond ring.

However when asked if he had named a date for the ceremony, Hoy remained coy.

He said: “We’re not getting married until next year and there’s no date set.

“That’s certainly something else on the horizon, but nothing has been set in stone just yet.”

The pair met in chic New Town bar Grand Cru at a mutual friend’s party two years ago, and Sarra has said that although she thought he was handsome, she didn’t recognise him at first.

Eighteen months later the Edinburgh solicitor was track-side at the Beijing Olympics cheering the champ to his historic Olympic win.

And accompanied by Chris’ parents Carol and David Hoy, yesterday she watched the Olympian collect an award previously handed to the likes of JK Rowling and Ian Rankin.

The Edinburgh Award is presenting to those from the Capital who have outstanding achievements and contribute to the city.

The judging panel unanimously voted Sir Chris the winner, and he will now have his handprints immortalized Hollywood-style in concrete outside the City Chambers.

He said: “I’m very honoured and delighted to be here today – this award is very special because it’s from my hometown.

“I thought that the knighthood would be the last thing, but this is an amazing honour and one that’s very special to me.

“You train to become the best at your sport, but outside of that any other accolade comes as a big surprise, it’s quite incredible.

“After the year I’ve had, I’ve been pinching myself to see if it’s all real.”

The award caps an outstanding few days for sporting Scots, as grass-court phenomenon Andy Murray clinched a quarter-final place at Wimbledon after breezing through the competition’s early stages.

The Edinburgh-born cycling champ offered some words of wisdom for Murray, advising him to keep his mind on the game.

He said: “I went down to watch Andy at Wimbledon on Saturday and I’ve been cheering him on.

“If I could say anything to him it would be to focus on his game and ignore the media, and all the pressure that’s on him.

“He’s got to make sure he enjoys it as well – having so many people cheering you on at Centre Court must be an incredible experience.

“The atmosphere on that court is something else, I’ve no idea what it will be like if he actually makes it through to the final.”