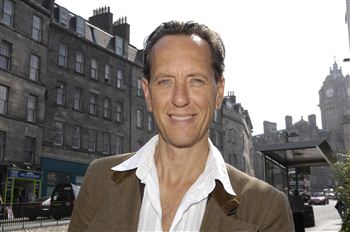 ACTOR Richard E Grant returned to the scene of his directorial debut screening yesterday when he was spotted out and about in Edinburgh.

He was strolling around the city under cloudy skies yesterday looking as dapper as usual in a corduroy jacket and chinos.

The Whithnail and I star wasn’t scheduled to appear at any of the film festival events, and wouldn’t say why he was in the city.

But the actor is no stranger to Edinburgh – the world premiere of his directorial debut, ‘Wah-Wah’, was at the Film Festival in 2005.

Originally from Swaziland, he moved to the UK in 1982 to concentrate on his acting career, spending most of his time in theatre until the breakthrough cult hit of Withnail and I.

Since then he has starred in numerous movies, both in the UK and America, and written two books.

He wears two watches at all times – one of which belonged to his father and is always kept on Swaziland time.

The star was out spotted yesterday for a walk near the Balmoral Hotel in Edinburgh before ambling down Leith Street towards the Omni centre – which houses one of the city’s biggest cinemas.

Do you know what Richard was doing in Edinburgh? Drop me a line at [email protected]