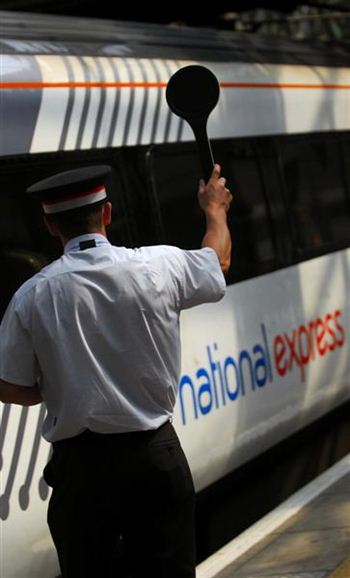 JUBILANT staff and customers were celebrating as National Express was stripped of its East Coast rail franchise yesterday.

Workers revealed they had been preparing to STRIKE fearing the company could have been putting safety at risk through a raft of cuts.

While customers were left hoping for a bumper cut in rail fares.

One Scots employee said: “We can’t wait to see the back of this lot.

“They were cutting back on everything from train maintenance to staff progression and training.

“A driver spoke at the last RMT annual conference complaining that he couldn’t get new brake pads without jumping through hoops because they didn’t want to spend money.
“There were genuine talks about going on strike to get these kinds of problems ironed out.

“The government has stepped in at just the right time.”

All staff will be retained by the government and services for passengers are not expected to be affected.

A slump in passenger numbers saw the firm losing a reported £20million in the first half of this year.

Transport secretary Lord Adonis said: “The government is not prepared to renegotiate rail franchises, because I’m simply not prepared to bail out companies that are unable to meet their commitments.”

His announcement came just hours after National Express boss Richard Bowker abandoned the company for a job with Union Railway in the United Arab Emirates.

National Express had been reduced to “desperate measures” to try to make up cash to pay the government a mammoth £1.4billion by 2015, staff said.

And the move to ditch them was widely welcomed in Scotland, both by the government and the National Union of Rail, Maritime and Transport Workers (RMT), who said privatisation of the railways had been “chaotic.” 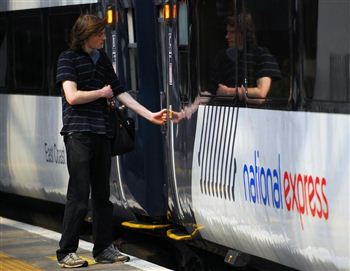 .“It should be a long term solution to the chaos that privatisation has brought to the UK’s most lucrative rail franchise.

“RMT’s national AGM will send a clear message to the Government today that they should strip National Express of their other franchises and use this opportunity to begin the process of renationalising the rail network.”

The cash-strapped operator gave up the reigns for the main Edinburgh to London link to the UK Government yesterday.

Bob Hendry, 63, of Dalgety Bay in Fife, said: “I pre-booked my seats last time I got a train from Edinburgh to London.

“But when we got on, they were already taken by people who had also pre-booked them.

“On top of that, there was no heating, no hot drinks and this was the middle of winter.”

His wife Eileen, 64, added: “I’m not convinced the government will be much better, they’ve got enough on their hands as it is.”

Another couple visiting Edinburgh, Mark and Nicole Checkley from Cambridge, said they hoped the nationalisation would make their journeys cheaper.

Mark, 39, said: “National Express were only in it to make money, not give an excellent service.

“Public transport is definitely something I’m happy to see the government retain.”

And Nicole, 38, added: “They should never have privatised it in the first place because it’s been a complete nightmare price-wise.

“Hopefully this will make it cheaper to get to and from Scotland.” 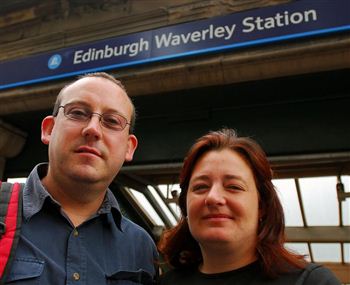 Lothians MSP and Holyrood transport committee member Shirley-Anne Somerville called for the Scottish Government to be consulted over the future of services provided by the new public company.

Ms Somerville said she will be writing to transport ministers both sides of the Border for details of future plans for Scottish involvement.

She said: “It is very concerning that the franchise operator behind this vital rail service from Edinburgh to London has collapsed in this way.

“This is a crucial connection for Edinburgh, particularly at a time when everything must be done to get people out of air travel and onto rails. This service has to offer a reliable, affordable and efficient alternative to flying.

“I welcome the reassurances that there will be no loss of services or jobs.

“It must not simply be handed on to another private company when a not for profit option could bring real benefit to taxpayers and passengers alike.

“As we are taking forward plans for a high speed rail link from London to Scotland it is essential we can have confidence in the services being delivered.”

They said: “All of our businesses have experienced difficult market conditions, whether in reduced passenger volumes or in lower growth in yield.

“Discussions with the UK Department for Transport have not secured an improved outlook for the East Coast franchise.

“As a result, the loss-making East Coast rail franchise will continue to be supported by National Express in line with its franchise support commitments until the committed funding is fully utilised, expected to be later in 2009.

“National Express would work with the DfT to ensure an orderly handover and ensure that passengers, services and employees are unaffected.”

The RAC Foundation predicted the government would struggle to do a better job than National Express and travellers could suffer.

Their director Stephen Glaister, said: “Whilst travellers might not see any difference when the franchise transfers to public ownership, this is a disaster for the tax-payer and just one more burden on an already cash-strapped department.

“The only reason National Express is handing back the service is because it is not financially viable, which does not bode well for ministers who will now have to move money from other vital projects.”