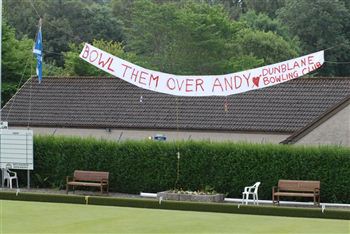 By CARA SULIEMAN, in Dunblane

ANDY MURRAY’S home town of Dunblane is gearing up for a weekend of Murray mania – convinced their local hero can make it through to Sunday’s Wimbledon final.

With Andy Murray scheduled to play in the semi final today (fri) a huge wave of excitement and expectation has washed over the Stirlingshire town.

Everywhere posters and good luck messages have been stuck up in window or walls while people on  street corners are full of talk about nothing else.
At Dunblane Sports Club, where Andy and his brother Jamie both honed their skills, there has been a  sharp rise in the number of kids flocking to join in recent days, all in the hope of starting on their journey of following their tennis dreams.

Bernie Beattie, 48, club secretary, revealed:  “We’ve seen an increase of about 20 per cent in junior memberships. 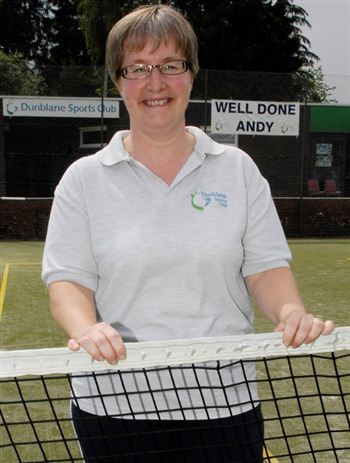 “They’re all hoping they can be the next Andy Murray.

“It’s good to get the kids out and playing especially during the summer holidays.”

She remembers both Andy and Jamie when they used to play at the club as emerging young talent.

Bernie said: “They were both very talented from a young age. When they were about eight or nine they were already playing for the men’s team here.

“Andy was good right from the start.”

And she’s backing him to go all the way to clinch the title this Sunday,.

She said: “He’s got a good chance. I think he gets under Federer  skin and annoys him.

“He just keeps firing those balls back at him.

“We’ll be watching at the golf club this Sunday and if he wins the party will come back to the tennis club.”

The pair have both played at Dunblane for eight years and won a few tournaments themselves – but hope Murray can achieve the big one.

Lorna said: “Federer is a hard one to beat but Andy has done it before plenty of times. It just all depends on so many things on the day. 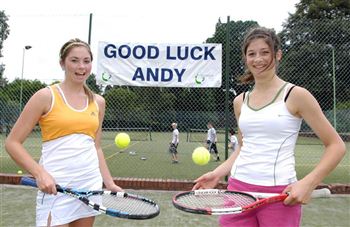 “But he’s got it in him to win Wimbledon – definitely.”

Julie said tennis has taken grip on the town thanks to Andy’s run.

She said: “The courts are really packed at the moment because of Wimbledon. We come down as much as we can – probably about four times a week.”

There’s plenty of support for the player all around.

Shop windows carry good luck messages and his face is plastered around town.

In one shop, John Hill Butchers, they have even created a new dish in his name – The Murray Burger. 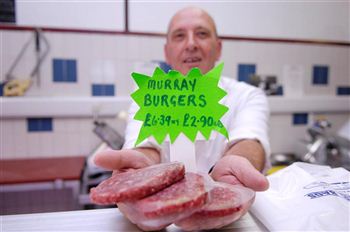 Keith Hannah who works in the shop said: “The Murray Burger is made of pure lean beef – just like the man himself.

“There’s no many left – they’ve been selling really well.”

So popular are the burgers that they’re even due to get star billing live on GMTV this morning when owner John Hill is cooking up the treat for hungry presenters.

But a more traditional dish will be up for grabs during the semi itself at the Dunblane  Hotel – free strawberries and cream. 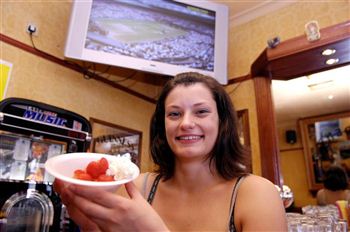 AS BRITAIN gears up willing it to be game, set and Murray later today (Friday) – locals from Andy’s home town of Dunblane were readying to help roar him through to the final at Wimbledon.

Every TV set in the town will be tuned to the semi final adding to the 17 MILLION people who have already watched his last two games.

But they know it will be a tough task in the SW19 heat.

Sheena Young, who owns Shenanigan’s Crafts on the High Street, said: “I think he will win. I certainly hope that he does but there’s been so much pressure and expectation on him this year. Let’s just hope he doesn’t crack under it. 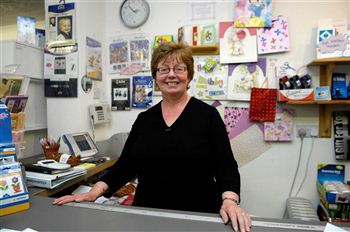 “My sons went to school with Andy and I know they will be cheering him on as well.

“I am sure if he does win there will be huge celebrations in Dunblane. This is the biggest thing to happen here for a long time.”

Heather Thompson, 21, a barmaid at the Dunblane Hotel, said: “We’ve been showing the tennis in the pub all day every day since Wimbledon started.

“I must say I wasn’t that keen on the game to start with but I’m starting to get really interested.

“We expect the pub to be packed out on Sunday if he gets through to the final.

“He has been absolutely brilliant this year and if he got through to the final it would be good enough for people in Dunblane.

“I know he’s got it in him to win but you can never tell what’s going to happen and I don’t want to jinx it.” 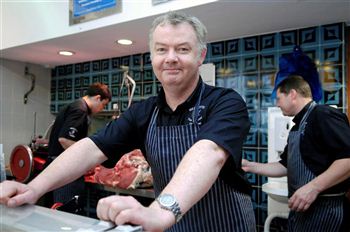 Graham Flemming, 44, who owns Bennet Butchers in the High Street, has lived in Dunblane all his life.

He said: “I hope he does win but it’s going to be a tough match.

“I would love to see him take the trophy on Sunday and I certainly think he’s got a good chance.

“He’s much stronger this year than he has been before and it’s not just wishful thinking.

“Hopefully this is his year. I’m going to try and watch as much as I can but can’t celebrate for too long as I’ve got to get up for work on Monday morning.”

Kellie Robertson, 33, who works at the local laundrette added: “I have been watching the tennis when I can and he seems to be doing really well. 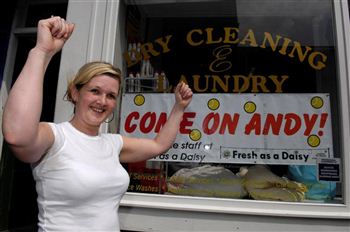 “We don’t have a TV at work so I’m missing out on quite a bit.

“But from what I’ve seen his playing has been excellent and I just think he’s great.

“He has achieved so much for his age.

“Hopefully we will see him achieve much more on Sunday.”