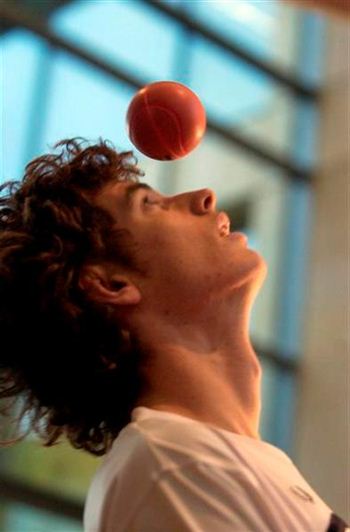 TENNIS star Andy Murray will be treated to a spectacular homecoming party – whether or not he wins Wimbledon.

The Scottish Government are drawing up plans up to give the 22 year-old a hero’s welcome that he’ll never forget when he returns home from SW19.

The world number three would become the first Brit to win the exclusive championship since Fred Perry.

Far from hiding from the challenge, Murray even wore a t-shirt emblazoned with “1936” – the year Perry won the title – after his quarter final straight sets win against Spain’s Juan Carlos Ferrero on Wednesday.

He plays American Andy Roddick in the semi final tonight (fri) with the mouth-watering prospect of a final against former champion Roger Federer.

Scotland’s culture minister Michael Russell revealed that the Scottish Government want to embrace the Dunblane-born player with a special celebration.

He said: “Andy is a wonderful star and a tremendous sportsman.

“He will always deserve a homecoming celebration and he will always get one – win or lose, he is going to get one.”

And plans are already underfoot in Murray’s home city of Stirling, where an open-top bus is lined up to give him a glorious return.

Mr Russell boasted that he remains the only MSP to have seen Murray in a Grand Slam final, when he took on Federer in the USA in September.

The South of Scotland SNP member said: “I was in New York to see Andy at Flushing Meadows in the US Open final and he gave a very good account of himself indeed.

“As an ambassador for Scottish sport, he is right up there.

“Everybody will be watching him in the semi-final and I for one will have not just my fingers crossed, but everything crossed for the success that I hope will come.

“He has done tremendously well to get this far and were he to do even better, then I am sure the whole country will want a party.

“There will be celebrations for a long time to come if he can do it.”

Murray, who was brought up in Dunblane, Stirling, is well loved in the area, and the Provost Fergus Wood can’t wait to welcome him home.

He recently met up with Murray’s mum Judy to open a new £27million sports centre in Stirling where Olympians will train for the 2012 London Olympics.

Mr Wood said: “We’re definitely going to be having a party for him, having already granted Andy the Provost’s Award for his tremendous contribution to sport.

“We realise he lives in London now, but when he comes home we’ll be sure to give him the welcome he deserves.

“Talks are at an early stage so it could be an open top bus or a special reception. We are discussing these things in between watching his thrilling matches down at Wimbledon.

“Obviously as the Provost of Stirling I have met Andy, Jamie and their mum Judy a number of times, and there is more talent in the area about to follow in their footsteps.”

And the Murray Mania bandwagon is at full speed with bookmakers, with McBookie cutting him from 5/2 to 9/4 to win, while Federer remains the 2/5 favourite.

A Murray victory would cost the betting industry an estimated million-pound payout.

Paul Petrie, McBookie.com spokesman said “It was a straight forward victory for Murray and the dream is still alive. The only bad news is that Federer looks equally as impressive.

“I am sure it is the last thing on Murray’s mind but he would be doing his bit for the credit crunch if he can lift the title and become the first Brit to win Wimbledon since Fred Perry.

“With the whole of Scotland behind him, the pressure is sure to be on.”