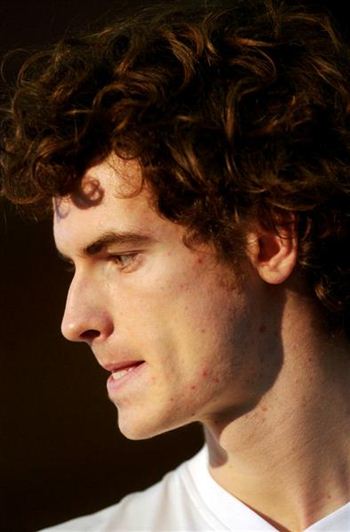 A GREEDY ticket tout is selling Centre Court tickets for a staggering £20,000 each.

Websites are awash with tabs for Sunday’s Wimbledon final after Murray’s electrifying performances made tennis the hottest ticket in summer sport.

Demand for tickets – normally priced at £100 – has soared with each Andy Murray victory.

The Scot quickly became British tennis fans’ only hope for the championship.

But many of the tabs for the final are fakes, and Wimbledon bosses admit they and police are struggling to control a rocketing number of frauds.

Ticket-hungry fans are forced to play spot the difference, with one webpage using a strikingly similar layout to the official internet site.
The £20,000 tickets are being sold on the premise that the hot Scot will beat American Andy Roddick in today’s semi final to face Roger Federer.

But the dozy tout thinks Andy Murray is English.

The London Gumtree trader’s ad states: “Watch Andy Murray take on Roger Federer in what promises to be one of the greatest sporting events of all time.

“Will Wimbledon finally have an English champion, or will Federer triumph once again?”

Fans have been queuing outside Wimbledon for 48 hours to get their hands on tickets for the semi-finals and final, while agencies report that demand is up four-fold.

Official trading sites vary hugely in price, with Ticketmaster-run Get Me In charging just £600 compared to Seatwave’s £5,500.

One site under investigation “onlinewimbledontickets.com” copies the official Wimbledon website’s famous green-and-purple livery and is designed to con tennis fans out of £2,500 for Centre Court briefs.

Bosses have called in police to try to stop the site ripping off desperate fans.

A Wimbledon spokesperson said: “We are trying to trace as many fraud operations as we can, in co-operation with the police.

“This one was particularly effective because the website looks so similar to the official site.

“We have made a lot of progress over the years in stopping the illegal sale of tickets and touting on the streets, but the internet is more difficult to control.”

But the internet trading is fuelled by completely legal debenture tickets – sold by tournament organisers up to six years in advance.

For £23,000 debenture holders get centre court seats for every round, every year for five years.

All 2,300 debentures up to 2015 have already been sold, and many tickets for the weekend’s finals are demanding thousands of pounds on eBay.

A high-profile police presence has stemmed the flow of touted tickets on the streets surrounding the All-England Club.