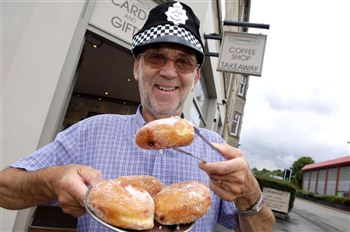 A BOMB scare at a police headquarters proved a real boom time for a tiny café – after hungry cops raided their supply of bacon butties.

What turned out to be a hoax bomb forced hundreds of police staff to flee their headquarters in Edinburgh yesterday (Tuesday) morning.

The suspect package was sent in the post to Lothian and Borders Police HQ and discovered in a mail room, sparking a mass evacuation of 350 workers.

While a bomb disposal squad moved in to investigate, around 50 cops took the opportunity to investigate the local roll shop on nearby Learmonth Avenue.
And after taking down the particulars from the morning menu they set about eating all evidence of food.

Hundreds of others sheltered from the rain in the neighbouring Broughton High School. 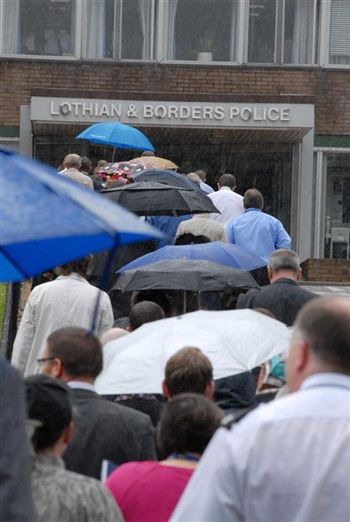 Connect Café owner Isobel MacKenzie, 60, said: “All these police officers came rushing in from the rain and I heard there had been a bomb.

“It was worrying for them but great business for us – we almost ran out of coffee and bacon rolls.

“A couple asked for doughuts – but unfortunately for them we don’t sell any.

“I wasn’t due to start work until Noon.

“But I was quickly called out of bed by my two staff struggling to keep up with the demand, so there were four of us by the end.

“Every cloud has a silver lining, as they say, and I think we helped calm some people down.”

Senior officers said the package was “made safe,” at 11.30am – over two hours after it was found – adding that they had no indication of any explosives being involved.

Chief Superintendent Charlie Commons vowed to “find the culprit and take them to court.”

Speaking outside the HQ, he said: “The package has been made safe by the bomb disposal squad.

“We are treating this as a hoax device and a full inquiry has begun.

“In the present climate it’s very disruptive and causes great concern to staff.

“There is no hint as to where it came from and I have no information relating to whether there was a note or letter with it.

“There is no information to indicate that explosives were involved. The exercise now is to find the culprit and take them to court.”