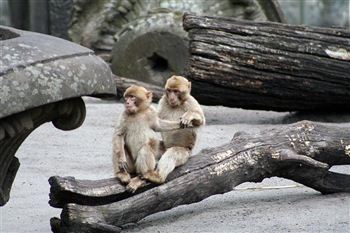 CHEEKY monkeys at Scotland’s biggest zoo had their keepers going ape – after spending a fourth day on the run.

They escaped on Friday afternoon after making a bid for freedom while being transferred between two enclosures.

Yesterday (Monday) zookeepers, armed with bananas and nets, were still chasing after the primates.

But the furry rebels were simply snatching the fruit from their hands and leaping back into nearby trees.

The gang of four Barbary Macaques even tried to rub shoulders with Edinburgh Zoo’s fearsome lions but were roared away – much to the amusement of tourists.
Stunned onlookers said it was “like watching real wildlife.”

Visitor Lynsey Scott, 28, said: “We were watching the lions when all of a sudden a monkey jumped out of a tree in front of us and the lions started to look rather interested.

“The lions started roaring and the monkey made loud chattering noises – it was so noisy but amazing, as it was like watching real wildlife.

“Then keepers arrived with loads of bananas in their pockets as well as nets and cages.

“But the monkeys just kept grabbing the bananas and running off.”

The Barbary Rock area where the monkeys were being transferred to remained roped off yesterday – although other areas of the zoo remained open.

Zoo officials said they had managed to capture some of the animals but four were still hiding out in trees yesterday.

The animals are not considered dangerous and the popular attraction remained open over a lucrative sunny weekend.

A spokesperson said there was little chance of the “sociable” animals escaping the zoo grounds.

She said: “On Friday a group of Barbary macaques in Edinburgh Zoo were moved to a different enclosure.

“When the macaques were placed in their new enclosure a small number of animals from the group escaped.

“They remained within the vicinity of the enclosure and the keepers were aware of their location at all times. These animals pose no threat to humans.

“Keepers were able to catch some of the macaques and they were placed back in the enclosure. The rest could not be caught but they are still within Zoo grounds.

“Macaques are highly social animals and the group will remain together so they are highly unlikely to stray far from the enclosure.

“We will continue our efforts to catch the remaining animals.

“We are still open to visitors but we may have to close some pathways around the macaque enclosure and we ask for their understanding and co-operation with this matter.

“After all the macaques have returned to their enclosure we will look into how these animals escaped and take steps to minimise the possibility of this happening again.”

However in February last year a tailless Barbary macaque was shot dead after escaping from a rabies quarantine cage.

The animal was tracked down several times but attempts to bring it down with tranquilliser guns failed and the order was given to shoot it.

At the time the zoo, home to more than 1000 animals, claimed it had “robust procedures” in place for such escapes.

The zoo’s now world famous daily penguin parade started off by accident in 1950 with the escape of several birds.

It proved so popular with visitors and the penguins that it is a daily feature of the zoo even today.