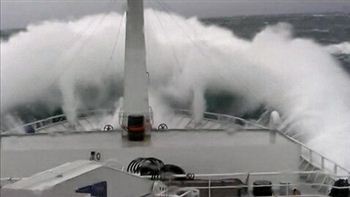 A TINY Scots brewery has unveiled their latest alcoholic creation – a beer costing £10 a BOTTLE.

Founder James Watt justified its’ hefty price tag saying he spent two months aboard a mackerel trawler in the North Atlantic with eight barrels of the expensive booze.

James was given an 1856 ‘Brewer’s Handbook’ as a present last Christmas which contained the age-old recipe and proved the inspiration for his attempt to inject life into the beer market.

IPA ‘back to its roots’

Watt said: “Today the term IPA has lost its meaning and UK brewers mainly use it to describe beers which are neither, particularly hoppy, or high in alcohol.

“It’s sad to see the great IPA heritage in this country come to stand for nothing more than a sparingly hopped low ABV blonde session.

“We wanted to take the style back to its roots and we have created the first genuine IPA for two centuries.”

But, although drinkers in Edinburgh were impressed with the efforts the brewery has gone to for authenticity, they have been left less than pleased with the price of the new hooch.

Fraser Wood, 43, from Musselburgh, East Lothian, said: “It seems they have gone to great lengths to create an authentic IPA, but at ten quid a bottle it will be out of most people’s price range.

“To be honest, it’s a bit cheeky to be asking for that amount for what is, after all, just a bottle of beer.

“I love my real beers – but I definitely won’t be splashing out ten pounds on a bottle of Atlantic IPA.”

Originating in the 1700s, India Pale Ales were developed in Britain and sent by sea to Brits living in India.

The beers travelled inside oak casks on board sailing vessels, but the lack of refrigeration and tempestuous sea journeys often compromised the brew’s quality.

India Pale Ale was born when brewers realised that together, hops and alcohol act as a natural preservative ensuring that the beer could withstand the voyage and arrive in good condition.