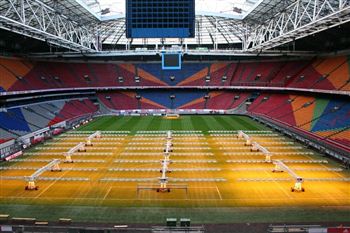 SCOTTISH rugby chiefs are following in the footsteps of the world’s top football clubs by installing state-of-the-art grow lights for their new Murrayfield pitch.

The artificial growth lighting system has been developed by a rose enthusiast in Holland who has transferred the pioneering concept to growing grass.

After a trial with his local side PSV Eindhoven the Dutch horticulturalist’s innovative system has been adopted by top football clubs including Manchester Utd, Barcelona and Celtic.

The mobile lighting arms are easy to manoeuvre around the pitch meaning they can be applied to specific parts of the playing surface.

The Home of Scottish Rugby’s surface was removed and recycled in May after the last tournament of the season – the Emirates Airline Edinburgh Sevens Festival.

And just prior to last month’s huge Oasis gig at the stadium the entire area was re-seeded. 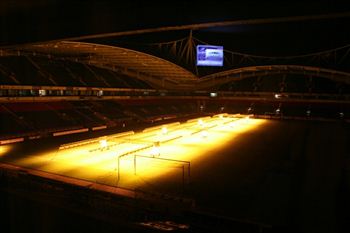 Mark Laidlaw, Murrayfield Stadium manager, said: “The pitch held up well last season and, with new lights, we will now be able to grow grass during the winter months, ensuring it will be in great shape for the seasons ahead.”

The Edinburgh stadium is also undergoing a major facelift with the removal and relocation of some of the ground’s turnstiles, along with a new welcome area.

A spokesman admitted the new turnstiles were a result of customer feedback, with many supporters claiming the existing turnstiles were too slow and unable to cope with the huge crowds the stadium regularly pulls.

Rugby chiefs have welcomed the “significant investment” which was announced yesterday. (Tues)

Inside the stadium, the hospitality areas are also to be refurbished and the developments will see improvement to the disabled facilities at the ground.

The new work follows on from the introduction of two high spec LED screens and digital scoreboards and the £2 million upgrading of Murrayfield’s four back pitches.

Moves have been made recently to ban major rock concerts from the stadium after last month’s Oasis gig descended into violence.

Residents complained about music fans’ anti-social behaviour and an emergency motion was put forward to the city’s council to prohibit any future events.

Councillors threw out the motion after deciding it was not an emergency matter and SRU bosses have warned a ban on concerts could cost Edinburgh businesses millions of pounds.