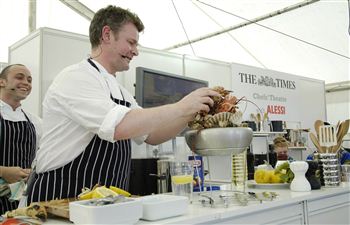 A TOP Scottish chef has quit the hotel chain started by racing champ David Coulthard to set up on his own restaurant.

Roy Brett has left his pole position as head chef in the kitchens of the Dakota hotel chain.

And now the former protégé of telly chef Rick Stein is to go it alone with his own seafood eaterie after racing away with a string of industry awards.

Brett has already won approval from the Edinburgh City Council to take over a new development on the city’s famous Royal Mile for his new venture Ondine.

The 40-year-old was lured north three years ago by Dakota’s founder Ken McCulloch who had persuaded his close friend Coulthard to act as a major financial partner.

He has named his new outlet after a mythological water spirit and has admitted he decided to quit the Dakota chain two months ago to seek out a “new challenge”.

Brett said: “I’ve had some great opportunities over the years, working with Ken McCulloch and Rick Stein, and the last three years have been really successful at Dakota.

“But I’ve been in the business for 20-odd years and I’ve never run a restaurant of my own before and it’s something I really want to do.

“When I decided to leave Dakota, I didn’t really have anything lined up, but someone else apparently pulled out of opening up next to Missoni.”

The top-rated chef is moving into a city centre site next to the new Missoni Hotel and will have considerable competition with classy restaurants such as The Witchery, The Tower and Hotel Du Vin close by.

Mr Brett said: “I was very keen to move into a new building rather than trying to convert an existing one, so it’s an ideal site and is in such an exciting location right in the heart of the city.

“There’s a lot of competition in central Edinburgh, but it’s not something I’m worried about.”

A spokesperson for Dakota said: “All we can really say is that Roy Brett left here a couple of weeks ago and that we’ve heard he’s about to set up a new restaurant on his own.

“We don’t want to comment any more than that.”

And a spokesperson for the top chef added: “Roy’s departure from the Dakota chain was completely amicable and he is looking forward to fulfilling an ambition to open his own restaurant.

“We are keen to stress that while Mr Coulthard was involved in the inception of the Dakota Hotel chain, his involvement in the enterprise ended about a year ago.”