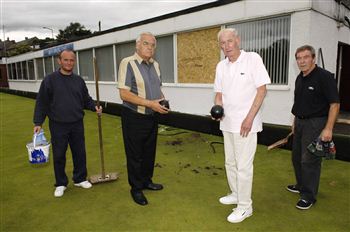 A TOP Scottish bowling club may have to cancel their prestigious ladies event this weekend after vandals broke in and poured white paint over their immaculate playing surface.

Vandals struck at Deans Bowling Club in Livingston, West Lothian, at around 1.30am on Tuesday and after breaking into the grounds man’s shed the thugs dug up the popular rink with a spiker before throwing a tin of masonry paint over the green.

Members at the club spent SEVEN HOURS working through the night trying to clean up the glossy mess before it could cause further damage by seeping through to the grass roots after the alarm was raised shortky after 2am.

Police are appealing for witnesses to come forward after they say the playing surface suffered “substantial damage”.

They were alerted by the club’s alarm system after the vandals smashed a window and tried to gain access to the main clubhouse during the spree.

The West Lothian club – which recently celebrated its centenary year – is renowned in bowling circles for having one of the best-kept playing surfaces in the country.

Treasurer Jim White, 67, admits he was “devastated” to receive a call from police informing him of the mindless attack.

He said: “I got the call from police about 2am this morning and I felt devastated to hear about the damage.

“I rushed down there to see how bad it was and our grounds man David Noon was already there hosing it down.

“There was paint all over the green, as well as huge divots where they had tried to dig the green up, some tools had been stolen and a window in the clubhouse was also smashed.

“I could understand it if someone had a grudge against the club, but this is just mindless, wanton vandalism.

“We carried on until about 8am and managed to clean up most of it. We needed to do it right away because if it had been left, the paint would have burnt through to the roots and we would have had to replace most of the rink.

“We’ve got a huge Ladies event on Sunday and we are trying to get everything back in place for that, but if the lawn has been badly burnt we might have to cancel.

“It will be a huge blow for us because we’ve invited clubs from all over the Central Belt to come and compete.

“As a club we’ve got an excellent reputation and our rinks are among some of the best in the country.”

Lothian and Borders Police are appealing for witnesses to contact them.