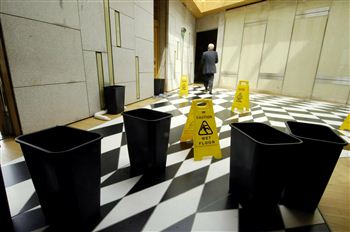 THE SCOTTISH Parliament’s construction has come under fire again after staff were forced to employ large bins to catch water from its leaking roof.

Just months after coughing up almost £100,000 to try and stop water seeping into the much-criticised building Holyrood bosses were left red-faced once again as water poured into the central corridor on Tuesday.

This week’s torrential rain proved too much for the £414 million building’s drainage system with staff having to place the large bins, yellow hazard signs and copious amounts of towels to soak up the deluge.

Now a leading MSP has admitted she “knew the roof and windows would leak” because of the rush job to accommodate the parliament’s opening and imminent arrival of the Queen.

Margo MacDonald, Independent MSP for the Lothians, claims the parliament was “built on the wrong site”.

She said: “This goes back to the time of the construction. There were lots of difficulties caused by the fact it was that building on the wrong site, but now we have the building and can do nothing but put up with it.

“We know in the final stages there was a huge rush job done because the Queen had been booked and it had to be finished.

“We knew the roof and windows would leak and it’s galling to realize how right we were.”

The latest flood appears to have caused damage to the timber ceiling and more buckets were deployed at the entrance to the chamber’s VIP gallery on the first floor.

A Holyrood spokesperson blamed a blocked downpipe and said the problem was currently being fixed.

But the building has been plagued with water problems even before the MSPs moved in just under five years ago.

In the weeks before the country’s politicians relocated to Holyrood the new parliament was besieged with problems as torrential rain was blamed when water came up through the drainage system badly damaging a police office in the basement in one of the committee towers.

And the following year, the building sprang another leak just days after scooping two top design prizes when water poured into the main staircase after an overhead cooling pipe burst.

The parliament’s underground car park has also been inundated with leaks, while numerous MSPs have complained about water leaking in to their offices through the unusual “think-pod” windows.

Officials have confirmed investigations into the leaks in the car park, the towers, the roof of the MSPs block, the area outside the crèche and the member’s lobby were carried out earlier this year.

A parliament spokesman said: “A blocked downpipe above the black and white corridor caused a build-up of water which subsequently leaked into the building.”

Contractors are currently working to clear the blocked pipe.