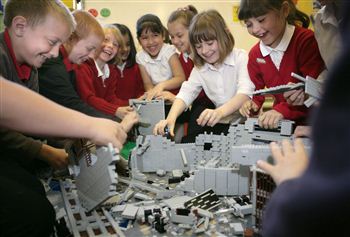 A GROUP of school kids have been given the dream job of demolishing the Scottish Parliament.

Pupils at the Royal Mile Primary School were handed a Lego model of the controversial building and told to knock it down.

The real building took a staggering five years to construct, but the model was destroyed in just 90 seconds.

The kids then turned the bricks into another world famous Scottish icon – the Loch Ness monster.
Although it might seem like mindless fun, it was all part of a project run by Lego that they described as “using the power of children’s imaginations to re-interpret iconic structures across the UK”.

Teaming up with the Brickish Association – the UK Lego fan club for adults – they wanted to see what school kids could make out of icons such as Big Ben, the Angel of the North and the Blackpool Tower. 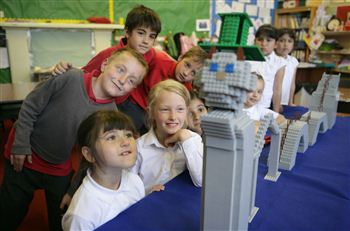 Warren Elsmore, chairman of the Brickish Association said: “Lego worked with us to recreate a number of famous buildings in Lego.

“Our members built them and we took them to schools in the area, where the kids smashed them up and built something else out of them.”

Warren said: “As soon as we had taken the photographs of the model they were tearing it apart. It took them about 90 seconds to demolish it.

“We worked with the kids to see what ideas they came up with. We wanted to do something Scottish and Nessie was an obvious choice.”

But Warren said that the kids actually quited like the Parliament building, unlike most of the public.

He said: “The school is right next to the back of the building, so they are used to seeing it. They like the design and shape and the colours.

“The kids do quite like the parliament, unlike most of us.

“I’ve seen it look nice once – one day from the top of Arthur’s Seat when we had really good sunshine.

“The rest of the time I think it’s too grey for Edinburgh.”