A GUN toting IT worker offered a teenager cash to have sex with his girlfriend before sniffing her pants during a terrifying ordeal. 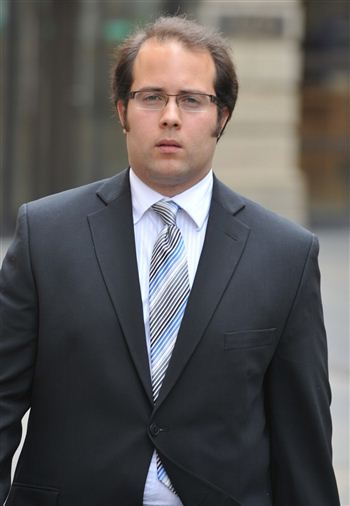 Drunken Karim Bourouba, 29, downed two bottles of champagne and half a bottle of vodka before stumbling upon the 19-year-old man and his 16-year-old girlfriend as they camped at an Edinburgh beauty spot.

The terrified pair handed over the girl’s pants to Bourouba – who was wielding an imitation handgun he had bought from the internet – and before watching as he sniffed them.

Bourouba – who had spent the day drinking at a work party – then took the couple on a walk around Edinburgh hunting for cigarettes.

After managing to separate from him they reported the incident to police who raided Bourouba’s home and found the fake gun.

Video games enthusiast Bourouba claims he bought the imitation weapon because of an obsession with the popular game Metal Gear Solid.

But at Edinburgh Sheriff Court he was found guilty of breach of the peace and firearms offences by a jury following a six-day trial.

The 12-woman and three-man jury found Bourouba guilty by majority of placing the pair in a state of fear and alarm during the incident.

They also found him guilty of possession of a firearm. They cleared him of a charge of assault and armed robbery.

His girlfriend – who had given evidence in support of Bourouba – sobbed as the verdict was read out.

The jury had heard from former Royal Scots soldier Liam Harrison – now 20 years old – who was the young male who was held by Bourouba.

Mr Harrison – who served with the regiment for one year – told the court that he went camping with a homeless friend because she had no where to stay.

He said after meeting-up through the day on May 22, the two decided to pitch their tent at Calton Hill and had just settled for the night when they were approached by Bourouba around half an hour after midnight.

Mr Harrison said: “I can’t remember what we were speaking about but the next minute he has pulled something from his jacket and to me it looked like a gun.”

Mr Harrison said he was able to identify the gun as a 9mm handgun as he had seen similar weapons during his days as a squaddie.

He said: “I was kind of freaked at this point, it was pretty scary.

“He wanted to give me money to have sex with my mate. It was not going to happen.

“I think she had popped her head out of the tent at that point, I don’t know if she saw the gun but he asked for her underwear.

“I think she freaked out at this point and went back into the tent. I told her what was actually happening, that this guy wanted her underwear and he was going to shoot me if it did not happen.”

Mr Harrison said his friend handed over the pants and Bourouba took them in exchange for 10 Euros and began sniffing them.

He said: “He started sniffing them in front of me. He still had the gun in one hand and the pants at his face in the other saying things that he could do to her.”

Mr Harrison said that after five minutes of this he suggested that they go into the centre of Edinburgh to look for a shop that sold cigarettes.

He said Bourouba accepted this and the female was given back her underwear before they made their way from Calton Hill to a Scotmid in Nicolson Street.

On the way, Mr Harrison said, the girl met a homeless friend who was begging and he offered to continue with Bourouba if the female stayed with her friend.

Bourouba and Mr Harrison continued to the Scotmid shop and the jury were shown CCTV images apparently showing the two buying cigarettes from there.

Mr Harrison made his way to a phone box on Princes Street and telephoned police during a 999 call which was also played to the jury.

Police contacted Bourouba using a mobile number he had given to Mr Harrison and he was interviewed a week after the attack.

Following his interview, he placed in an observation cell and put on suicide watch.

Sheriff MacNeill added that there was a possibility Bourouba will be placed on the sex offenders register when he returns to court next month.