Pensioner is suing her council after losing her front teeth

A PENSIONER is suing her council after losing her front teeth in two separate falls on the same stretch of pavement.

Now she wants the council to repair the cracks on both sides of the road so others don’t fall victim.

She said: “The state of the pavement is just shocking. It is uneven and there are dips in it up to two inches deep. Even when you are being careful it is incredibly easy to fall down.

“It was flagged up years ago, but it continues to deteriorate.

“You have to worry because there are a lot of old people who go back and forth everyday using Zimmer frames and sticks.

“It is potentially lethal.”

The retired teacher first fell on the pavement on June 25 when she was walking from the Somerfield store towards the west end of Easter Dalry Road.

In that accident she lost her two front teeth, cut her face and grazed her hands and knees.

And in the second fall last Wednesday, Marion lost another three teeth and received more bruising and cuts.

She said: “I am very stiff and very shaken. It’s a sad day when you can’t even trust the pavements outside your home.”

Marion has now asked for nearby CCTV footage to help in her claim for compensation from the council, but said that the money is not what it is about.

She said: “That is not the real point. The area is a death trap.

“I am not a tottering old woman. I am fully able, yet I still fell even when I was bring very careful, walking like a cat on a hot tin roof.

“I fear for other elderly people in the area. The pavements are in dire need of a fix.” 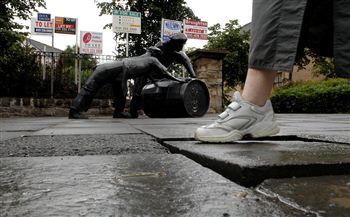 Marion reported the first fall to the council, but a spokesman said that a private utility company was responsible for the area.

He said: “On inspecting the sire, we discovered that her fall was due to a sunken manhole cover belonging to a utility company.

“We immediately issued a defects notice to the company, requiring that they make the necessary repairs, but this has yet to be actioned.

“We have since contacted them once again to remind them of their responsibility.”

Marion’s second complaint about her more recent accident is still being investigated.