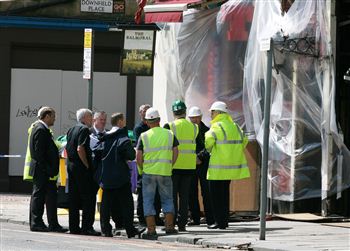 DEVASTATED fire-fighters were finally given the go-ahead to begin probing the cause of a fatal pub fire that robbed them of a heroic colleague yesterday.

Grim faced fire chiefs spent much of yesterday (tues) locked in close discussions with Health and Safety officials outside the burned out shell of the Balmoral Bar in the Dalry area of Edinburgh.

Seasoned detectives from L&B’s CID unit were already on scene yesterday as every effort is made to find out what started the huge fire.

Tragic Ewan Williamson, 35, was killed after the pub floor collapsed beneath him as he helped rescue residents who were trapped inside the burning tenement building above.

Twenty people, including a baby and two more children, were rescued by the fire service as over 70 brave fire fighters fought to contain the blaze.

Colleague Oliver Carrigan was also injured during the inferno that broke out in the popular bar’s basement around 12.30am on Sunday morning.

He was still recovering.

The official investigation into the cause of the fire was delayed as the fire service battled to finally extinguish the burning embers.

Only yesterday were they given the go-ahead to enter the building and start sifting through the debris.

A thermal imaging camera was used to try and locate the main areas of interest.

Structural engineers were also examining the building amod speculation that at least part of it may have to be knocked down. 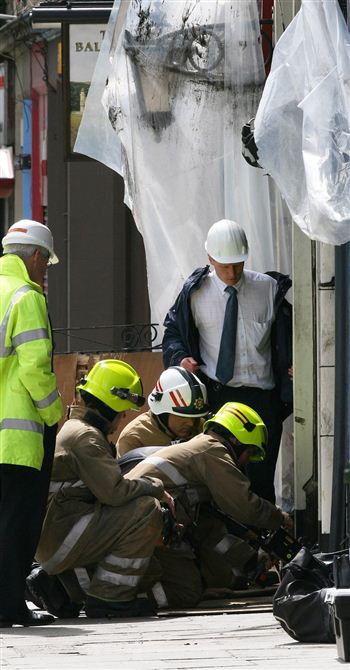 As they set about their task, a steady stream of tear stained relatives, friends, colleagues and ordinary members of the public continued to pay their respects by laying ever more flowers at the scene.

The outcome of the official investigation is expected to last at least a week with the final outcome expected within a fortnight.

A spokesperson for the pub owners said: “Trust Inns Ltd, a privately owned business, confirms that it is the freehold owner of The Balmoral bar in Dalry Road, Edinburgh.

“The premises are leased to a tenant landlord.

“Our thoughts are with Ewan Williamson’s family and friends at this very difficult time.

“The cause of the fire is as yet unknown.

“Trust Inns will cooperate fully with the relevant authorities and their inquiries into the cause of the fire.”

Yesterday there was no sign of Brian Haston, understood to be the current licensee, at his home in the city’s Granton area.

There had been speculation locally that he had been considering quitting the trade, possibly to become a cab driver.

One neighbour said: “He’d been talking about it, but I don’t know if he’d decided for sure. He’ll be just devastated over this.”

Mr Williamson’s family were yesterday being comforted by senior officials from Lothian and Borders Fire and Rescue Service.

It was thought they are now having to turn their thoughts to what kind of funeral service may be appropriate once his body has been released by police.

Some kind of large public service to allow his colleagues to pay their respects in Edinburgh could be likely.

But it’s thought there could also be the possibility of a separate, smaller private affair in Kinross, Perthshire, for his family and close friends. 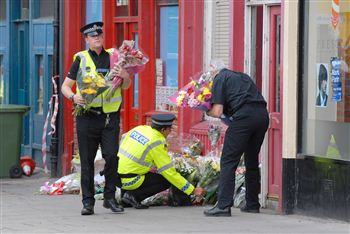 Yesterday a carpet of flowers that had been laid outside the pub where Ewan died was moved to a more accessible place.

Annette McGhee, 61, a member of the public who arrived to pay her respects yesterday said: “I didn’t know the firemen who died but I felt compelled to come down and pay my respects. It’s a terrible tragedy and I really feel for his family at this time.

“Everyone in the community is deeply shocked that such a thing could happen around here.”

She added: “He will always be a hero to us. Laying a bunch of flowers is the least I could do.