ZOOKEEPERS at a West Lothian zoo are celebrating the birthday of Stumpy – quite probably the oldest lemur in Europe.

Stumpy has reached the grand old age of 23, despite most lemurs only living until 20.

Staff at the Five Sisters Zoo near Polbeth, believe he may even be the oldest, and credit his long years to an easy-going lifestyle.

Zoo-keeper Graeme Curran, 21, said: “23 is a really great age for a ring-tailed lemur, because in the wild they very rarely live past 20.

“They’ve got a much better chance in captivity because there’s more medical treatment, no habitat loss and just a generally better quality of life.

“We believe that he could be one of the oldest lemurs in Europe, and may very well actually be the oldest.”

“We’ve got a really friendly bunch of lemurs here at Five Sisters Zoo – they were pretty wild when they arrived from Edinburgh Zoo but we’ve worked with them a lot and now they’re very friendly.

“They are very happy to have us coming in with them, and to spend time with members of the public. 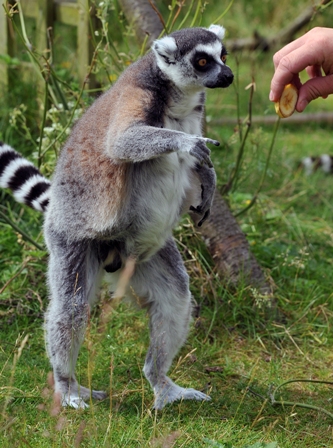 “When this group first arrived Stumpy was very much the alpha male, but he’s calmed down a lot in his old age, and allows the other boys to roam around a lot more.”

Lemurs are one of the main attractions at Five Sisters Zoo, where staff are gearing up for the busy summer season. Stumpy turned 23 just last month.

The zoo has enjoyed a recent surge in visitors following a difficult winter period, thanks to poor weather and effects of the recession.

However a successful bout of fund-raising saw visitor numbers soar, with February and March seeing almost four times as many visitors as the previous year.

Mr Curran said: “It’s the beginning of the summer season, and we’re expecting to be very busy with the school holidays starting as well.

“We’ve got plenty of activities on each day – you can come in and feed the lemurs and we have a big open day on 15th August.”