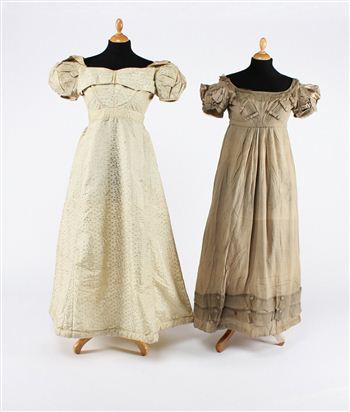 Now two antique wedding outfits that could fit the bill are to go under the auctioneer’s hammer this month – expected to fetch over £3,000.

A stunning cream wedding dress and a beige “going away” outfit which are almost 200-years-old are to be sold by a Scots family to “ensure they are preserved for many years to come”.

The outfits were once temporarily housed in a Scottish museum but were handed back to the Menzies family, from Humbie, East Lothian.

The delicate 19th century dresses will now sell at a prestigious auction of textiles, where they are widely expected to go for over £3,000.

Hilary Menzies, who inherited the 1829 heirlooms from her mother, said the outfits were first worn by her great-great-great grandmother on her wedding day 190 years ago.

Passed down through generations

She said: “It was worn by Davida Sutherland during her marriage to John Geddes, and the going away dress was worn during her honeymoon.

“I don’t know all the history, but the wedding gown was then passed down to her daughter Margaret Geddes, who we think also wore the dress.

“She married Thomas McLauchlin who was head of the Free Church of Scotland. Since then, the dresses have been passed down our family until they reached us.”

Mrs Menzies has decided to sell the family heirlooms because she wanted to make sure they were looked after properly.

She added: “The dresses are so beautiful, but they are very delicate. I think if I was looking after them they’d be eaten by moths within five minutes.

“They should go to a museum, specialist or collector who really wants the dresses.

“The family is sad to see them go but we think this will be for the best and will ensure they are preserved for many years to come.”

The wedding dress is cream, with a high waist, short puffed sleeves and pleated detailing around the neckline and hem. The going away dress is beige with a high waistline and chiffon and button detailing. The dress’s sleeves are made from short silk satin.

Eleanor Keen, head of textiles at Bonhams, said the auctioneers were very excited about the forthcoming sale which will take place on 28 July in Knowle, West Midlands.

She said: “They’re a very desirable dress because early 19th century clothing is associated with Jane Austen. The empire line dresses like these ones feature in Jane Austen-style films.

“These dresses were in fashion until the 1840s when big, flamboyant ball dresses became popular under Queen Victoria.

“Mrs Menzies dresses are incredibly well-preserved and will make a lovely addition to somebody’s collection.”

Also for sale at the auction will be a pair of 17th century Jacobean curtains which are expected to fetch around £6,000.