Yet despite the weather hundreds still lined the cobbled streets of Edinburgh to pay their respects to the 35-year-old who died trying to save the lives of others.

It paused briefly for those colleagues to say goodbye, before gliding on to St Giles’ Cathedral on the High Street where the special service took place.

Rows upon rows of fire-fighters greeted the cortege as it reached the Cathedral and members of Green Watch whom he served with carried the coffin inside to where 650 mourners were gathered.

Covered in the flag of Lothian and Borders Fire and Rescue Service, the coffin had a helmet and white lilies on top. 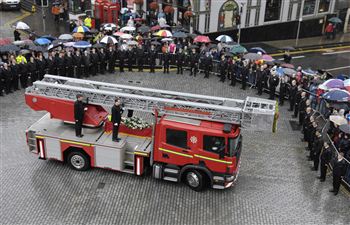 As part of the service, both the Lord Provost George Grubb and Chief Fire Officer Brian Allaway paid tribute to the tragic fire-fighter.

Readings were heard from Ecclesiastes 3 and Romans 8, and three hymns were sung – Psalm 103, The Banks o’Doon and Maccabaeus.

But it was the words of those who spoke about Ewan that hit home with the crowds outside the cathedral as they celebrated his life.

George Grubb thanked Ewan and his colleagues on behalf of the people of Edinburgh for their dedication to the job.

He said: “Ewan Williamson lost his life fighting fire in this city and he lost it on our behalf.

“He paid the ultimate sacrifice of his life.” 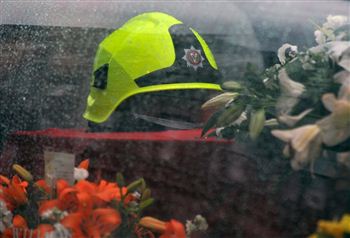 Fire Chief Brian Allaway also paid tribute to the tragic fireman as his voice cracked with emotion throughout his speech.

He said: “Wonderful, kind, outgoing, a great sportsman and loved by everyone. Words that Ewan’s family used to describe him, and words that I certainly agree with.

“What I would like to do today is pay tribute to Ewan on behalf of everyone at Lothian and Borders Fire and Rescue Service.

“When at 0038 on 12 July we received a call at a fire in a public house in Dalry Road, Edinburgh Ewan was one of the fire-fighters to attend.

“It was while carrying out this task and following a floor collapse that Ewan made the ultimate sacrifice doing the job he loved and trying to save the lives of others.” 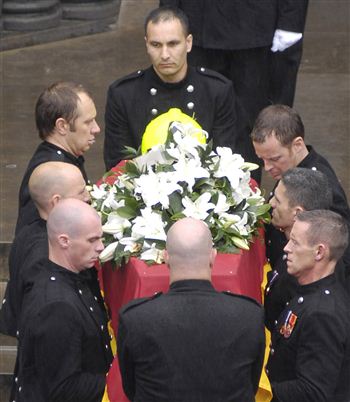 riend Lynsey was visibly upset and she and the rest of his family – mother Linda and sisters Rebecca and Rachel – started their journey down to Mortonhall Crematorium where a private service was held.

The family had held an earlier service earlier in his hometown of Kinross as colleagues from across the UK gathered in Edinburgh.

As as it ended people lining the streets bowed their heads in respect as they passed by towards their final private moment of grief.

Roddy Robertson, FBU Scotland Executive Council member, said the hundreds of fire-fighters who attnded had travelled from right across Scotland, Wales, Northern Ireland and England to pay their last respects.

He said: “Ewan’s death in the line of duty has had a profound impact on his colleagues in Lothian and Borders fire service.

“It has also been deeply felt by his colleagues in fire brigades across the UK.

“We speak with different accents and different languages but we all know the risks and dangers of fire-fighting.

“It is that which binds us together during this awful time and our thoughts will be with Ewan’s family and friends.” 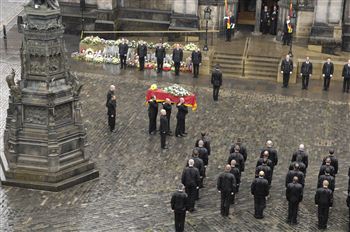 FBU General Secretary Matt Wrack added: “Ewan’s death is not only the loss of a fire-fighter but a terrible loss to his family and colleagues.

“It is also a loss to the community which I know he served with professionalism and pride.

“His death has touched colleagues in other fire services across the UK. In the fire service we think of ourselves as a family and we are united with Ewan’s family in grief and sadness.”

Scottish Tory leader Annabel Goldie was also among those to pay tribute to the fallen fire hero.

She said: “It is a sad occasion such as this which reminds us all of the huge debt of gratitude we owe to those who work in our emergency services.”

The family had earlier held a private service in Ewan’s hometown of Kinross. 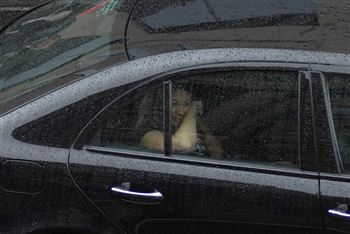 They then travelled to Edinburgh where the funeral cortege left from his old station at Tollcross around Noon followed by five cars and headed by a lone piper.

Mourners packed the streets to show their support.

One woman said: “I just felt it was important to support the firefighters of Lothian and Borders Fire Service. My husband is a firefighter, and I’ve got friends in the Fire Service.

“I just wanted to pay my respects to Ewan and his family.”

“It’s such a dreich day, it couldn’t have got any more wet, but still thousand of people have turned out and that just goes to show how much it means to everybody in Edinburgh.”

“It’s wonderful to see so many people turn out to pay their respects.

“All too often we forget what the fire-fighters have to do for us.”

Today simply wasn’t one of those times.

Ewen’s family released an emotional statement, including a biography of the fallen hero today.

They said: “Ewan had a wonderful spirit, a smile that would light up a football field and a witty sense of humour.

“He was a kind and giving person, always willing to help anyone that asked. He was not only a brother, but a best friend to his sisters, Rachel and Rebecca.

“He leaves a huge hole in our hearts and will be deeply missed, and never forgotten.”

His family described Ewen as a sporty individual who played basketball – representing Scotland’s junior team – and studied towards a sports degree at Leeds University.

Ewen – originally from Carnock, Fife – loved to travel and spent a year visiting and working in New Zealand, Australia, Bali, Sumatra and Fiji.

He returned to Edinburgh in December 1999 and was accepted into the fire brigade in 2002, where he was popular member of the fire and rescue service.

He met his girlfriend Lynsey in 2006 and was godfather to a close friend’s child.

To his friends he was known as Scooby.