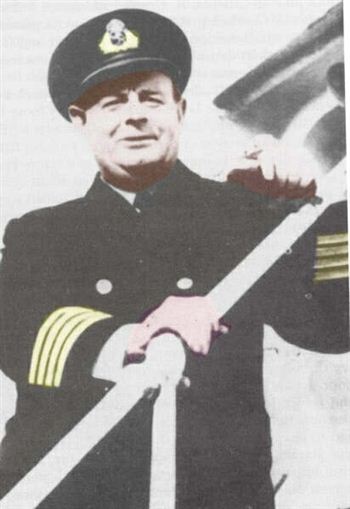 THE SCOTS Captain of the two worst maritime disasters in British naval history has finally been honoured – almost 70 years after the loss of 6,000 brave men.

Captain Rudolph Sharp was in charge of the Clyde-built Cunard liner Lancastria which was attacked by German bombers in June 1940 and was sunk in just 20 minutes.

Sharp survived the attack, but over 4,000 of his men lost their lives that fateful day, and the wartime incident remains the worst loss of life in British maritime history.

Shetland-born Sharp, who came from a long line of seafarers, went on to perish while commanding another vessel, the Laconia, off the coast of West Africa in 1942.

The Laconia, a converted ocean liner, was torpedoed by German submarines with the loss of an estimated 1600 victims, and remains Britain’s second worst maritime disaster in history.

The brave Captain, perhaps conscious of the unfounded guilt he felt over the earlier loss of the Lancastria, reportedly ensured the women and children were placed in lifeboats, then walked to his cabin, locked the door and went down with the ship.

Yesterday’s medal ceremony was arranged by the Scottish Government after all survivors’ and victims’ families were recognised last year for their ultimate sacrifice.

It follows a long-standing campaign by the Lancastria Association of Scotland.

Great-granddad daughter Claudene Sharp, 36, said: “We’re very proud of our great-grandfather, but sad about what happened.

“He ended up going down with the ship he captained afterwards, the whole experience of what happened with the Lancastria really affected him.

“He never really got over it.”

“It’s amazing that his valiant efforts are being recognised in this way.

“We always grew up knowing about him and being incredibly proud – we had no idea until recently that he and the Lancastria disaster were so well-known.

“We’re all in awe of his sacrifice and what he gave.”

“The whole family is full of seafarers – I’m a marine engineer myself.”

“While working at sea you do think about all those things that could happen – it’s a sobering thought.”

SNP MSP Christine Grahame, who helped campaign for the post-humous medal, made today’s presentation and said: “Captain Sharp was at the centre of two of the worst maritime events of World War 2. From contemporary reports it is clear the loss of the Lancastria bore heavily on him.

“He survived the loss of the Lancastria when thousands perished.

“That was not as a result of his poor seamanship, but the result of the horrors which war imposes and a combination of events that were to prove catastrophic.

“Having met other survivors of this tragedy I know this is an event that changed men forever.

“It is not therefore difficult to see why, just two years later, when he was in command of the Laconia he chose not to try and save himself but go down with his ship.

“I am delighted today to be able to present Captain Sharp’s medal to his descendants and I am certain it will be a positive reminder of a remarkable individual.”

A significant number of Sharp’s descendents remain involved in the maritime industry and were born and grew up in Australia.

Peter Sharp, Captain Sharp’s grandson owns a shipping line of his own in the Far East which is managed by his son Alexander, 28.

Alexander’s sister, Claudene, 36, who also attended Parliament is a Chief Engineer with Teekay Marine Shipping which has offices in Glasgow, and the third great-grandchild, Robert Sharp, 41, is an orthopaedic surgeon currently working in Scotland on an exchange.

Launched in 1920 on the Clyde, the Lancastria served as a cruise-ship across the Atlantic and the Mediterranean before being converted into a troopship at the onset of World War Two.

Currently, the wreck lies in international waters and the British Government has refused to recognise the site as an official maritime war grave despite pressure from survivors and groups such as the Lancastria Association of Scotland.

However, in June of last year, First Minister Alex Salmond presented medals to survivors and their relatives, while the fight to properly recognise the tragedy goes on.

The BBC have confirmed that the loss of the Laconia will be the subject of a major two part drama to be shown next year, written by acclaimed writer Alan Bleasdale.

The drama will be accompanied by a documentary examining the historical details that led to the loss of the vessel and Captain Sharp.