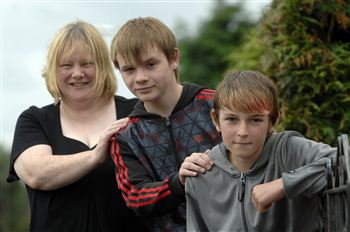 THREE HOODIES are being hailed heroes after rushing to save the life of an elderly woman they found lying in her garden.

Evelyn Fraser was cutting her grass in the Duddingston area of Edinburgh when she collapsed and lay unconscious.

But three teenagers who were walking past saw the OAP and rushed to her aid, stopping her from swallowing her tongue and calling an ambulance.

And now the 79-year-old’s daughter, Pamela Lynch, has praised the actions of the boys, saying they almost certainly saved the life of her mother who is now waiting for heart surgery.

She said: “Young guys get so much criticism these days, but these boys did something really good.

“It was pouring down with rain, but they made sure she was OK when others were just walking past.

“I really think they deserve some recognition for this.

“They didn’t have to do what they did.”

Friends John Clifford and Alex Scott, both 14, and 13-year-old Dylan McCallum were walking by Evelyn’s house last Monday when they saw her lying in the garden.

Rushing to her side, one of them went to get neighbour Laura Bald, 53, who gave the OAP first aid until the ambulance arrived.

John Clifford said: “We were just walking along when we saw her lying down.

“We ran in and she wasn’t moving so we went to get Laura.

“We tried to talk to her at first, but we were getting nothing back. Once Laura came out we were able to help turn her over.

“We didn’t really think about it at the time, it was just lucky we were walking past.”

And Laura has also applauded the youths, telling how they have been round a few times since the incident to see how Mrs Fraser is getting on.

Although still in the Edinburgh Royal Infirmary, Laura is getting updates from the family.

She said: “It was really touching, not just the way they came to her help, but the fact they’ve been round a few times since.

“It was that day when the rain was just chucking it down, and even when the ambulance came they insisted on standing there in the rain to see if she was okay.

“Even after they’d called me they were trying to stop passing cars and people for help and they just kept going.

“It restores your faith in youth when you see this kind of thing.

“When I saw the way her tongue was, we rushed to sit her up and then at that point she was sick. We got a blanket round her until the ambulance came.

It is a close community up here and we look out for each other.

“It’s fair to say they might well have saved her life.”