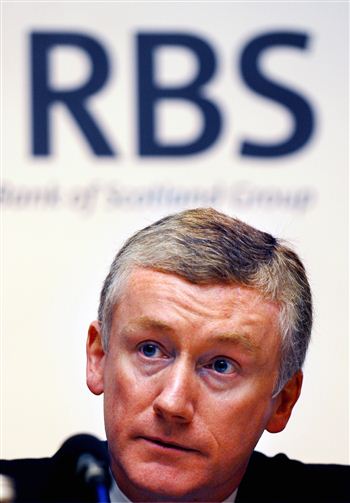 SIR FRED GOODWIN was said to boast to friends how “inordinately proud” he was of his knighthood from the Queen, bestowed to him in June 2004.

Now Sir Fred’s meteoric fall has finally reached its nadir and the disgraced former RBS cannot even call himself Sir Fred – for fear of public abuse.

The disgraced banker – responsible for one of the largest banking disasters in British financial history – now refers to himself as Mr Frederick Goodwin to avoid drawing attention to himself.

His wife has done the same, going by the name Mrs Goodwin instead of Lady Joyce.

The news emerged as Goodwin and his wife booked two economy class seats from Nice – nearby where they have been lying low – to London on a British Airways flight.

They even booked seats at the back of the aircraft to avoid being recognised.

A BA source said: “Before the credit crunch, Fred Goodwin was one of BA’s most elite and valued customers – and he was very keen on being addressed as Sir Fred.

“All his tickets were booked as Sir Frederick.

“It was always Sir Fred this, Sir Fred that. He would be seated in the front row, in the very best seats.

“To see him now, hiding himself and his wife by the loos at the back of economy is ironic.”

Labour MP Martin Salter campaigned for Sir Fred to be stripped of his knighthood.

He said: “It is very gratifying that he appears to have been shamed into doing it himself.”

After his resignation from RBS, Goodwin was under the spotlights for months while he faced House of Commons committees into the bank’s behaviour.

He faced calls to give back his huge £700,000-a-year pension, and even faced attacks on his house and luxury cars by enraged members of the public.

Goodwin fled his Edinburgh mansion for a friend’s house in the south of France near Cannes earlier this year.

The house is reportedly equipped with round-the-clock security and has high walls.

The Goodwins were returning to the house near Cannes on Tuesday after an incognito lunch with Prince Charles at Clarence house.

The lunch was to mark his official departure from the Prince’s Trust.

Six months ago Goodwin was forced to step down to avoid bringing the position into disrepute.

Similarly, students at St Andrews University have campaigned to have his honorary degree stripped, after many said that it was embarrassing to be associated with Goodwin.

Goodwin was nicknamed “Fred the Shred” after shedding jobs and costs, while spending millions on private planes and high-profile RBS ambassadors.

But after years of gambling at the head of RBS, the debts finally caught up with the firm and the Royal Bank of Scotland were forced to ask for the largest government bail-out in British history.

One RBS source commented: “No one was more inordinately proud of their knighthood than him.”

And the source said of Goodwin’s 49-year-old wife:

“She was mighty chuffed with being Lady Goodwin – she thought it was a symbol of how much they had arrived in high society.”