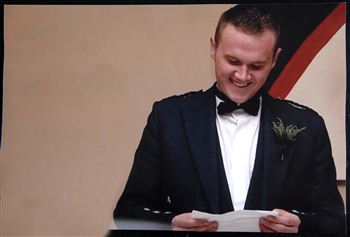 A TRAGIC dad killed on holiday in Spain was laid to rest yesterday (mon) – leaving behind an 18-month-old son and long-term girlfriend.

Tributes were paid to Thomas Patterson, 21, at a service yesterday afternoon in Eastern Cemetery in Edinburgh some 10 days after he was killed while crossing a busy dual carriageway while out holidaying on the Costa Blanca.

Mourners heard him described as an “amazing dad” and “great boyfriend” by his grieving loved ones, who affectionately knew him as Tam or Top Cat.

Thomas, a roofer from Moredun in Edinburgh, had been on holiday with two cousins and two friends from work when tragedy struck on July 17.

He was hit by a car as he tried to cross a dual-carriageway after a night out with and although he was rushed to hospital, died three hours later.

News was broken to his grief-wracked girlfriend of two years Allana at the home they shared with 18-month-old son TJ who left a Celtic strip outside in tribute, with the message: “The best daddy in the world”, written on the back.

A large Saltire was also hanging outside in tribute to his love of Scotland’s heritage.

Brother David, 25, said the close knit family had been left stunned by the tragedy, not least his parents Aggie and Pele who lived across the road from him.

He said: “He’ll always be with us. My mum called him her ‘wee toddler’ as he was the youngest and we’d all look after him.”

“He came round the night before he went. I was giving him tips because I’ve been there before.

“We’re devastated this has happened but we’re a big family and we’ll stick together.

“We’ll help each other through.”

He added: “He was an amazing dad to his wee lad TJ and a great boyfriend to Allana.

“Thomas had a lot of friends – he was well-loved and will be remembered.”

More than 8,000 people have so far visited a Bebo page to pay tribute to Thomas and another 1,000 have left comments paying tribute.

A keen footballer, he would often be seen playing at the five a side complex at Gracemount Leisure Centre and was a huge boxing fan.

David said: “He was a big sports man.

“He was a huge fan of boxing and trained at the local club in Craigmillar from the age of six.

“We’ll remember Thomas by his boxing videos and we’ve got a video of when he gave a speech at my wedding last year.

“It was very funny, he was such a happy-go-lucky person.”

Thomas is also survived by his two sisters, Mary and Agnes, along with four nieces and nephews, Breanne, Brian, Kiara and Erin.

He was killed in the Torrevieja resort.

A spokeswoman for the Foreign Office said: “We can confirm that Thomas Patterson was killed in a road accident on 17 July in Torrevieja, Costa Blanca. Consular assistance has been provided for his family.”