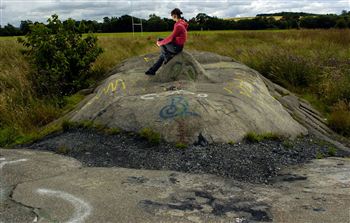 A SCULPTURE designed by murderer-turned-artist Jimmy Boyle is to be demolished as part of a plan to improve flood defences in Edinburgh.

Gulliver the Gentle Giant has spent the last three decades slumbering in an Edinburgh field but will now be destroyed to make way for a new flood prevention scheme.

Unveiled by Scots funnyman Billy Connolly in 1976, the feature has been part of the landscape in Craigmillar, Edinburgh for over 30 years.

But locals have slammed the plans for the destruction of the iconic concrete landmark claiming it is “an integral part of the community”.

However a multi-million pound plan will see his creation make way for a new water course created as part of flood prevention and regeneration of the once-run down area.

It had initially been hoped that the popular sculpture could be saved.

But a recent survey has shown the concrete and steel giant is in such a state of repair that any attempts to move it would prove futile.

David Walker, from the Craigmillar Community Council, said: “It’s a real shame they are to break the statue up. A number of people will not be happy about this decision as kids around here have played there for generations.

“I believe the flood measure reasons given by the council are just a smokescreen because this is all about house prices.

“They want to create a canyon between the old, traditional Niddrie and the new housing scheme they are building on the football pitches.

“There has been no flooding around here for years, so why they are concerned about flood barriers is beyond me.

“The sculpture really is an iconic and integral part of our community.”

Alternative routes to work around the giant have been explored by the city’s council but it has been decided the loss of the artwork is preferable to losing some of the adjacent sports pitches that surround it.

Sculpture had its day 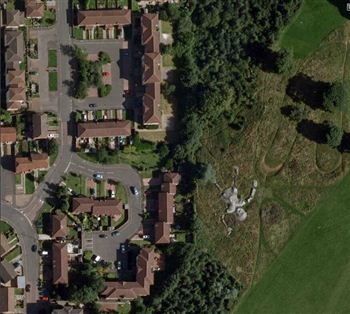 Local councillor Mike Bridgeman said he loved playing on the statue as a child but it was now time for the giant to go.

He said: “I can remember running all over it when I was growing up there and it was great fun, but I have been told it is in a very bad state of repair at the moment.

“It was built of concrete and steel frames, and has been there for more than 30 years, so it has probably had its day.

“It’s a shame though, and I hope when they are drawing up plans for a piece of art to replace it they take the time to speak to the local community, and work with them to create something that people want to see.”

The proposed work for the area includes realigning a 1,800 metre stretch to create a natural river corridor to provide the community with better protection from flooding.

Features such as cycle ways, seating, new meadows and an otter refuge will also be incorporated into the new design for the area.

John Bury, the council’s head of planning, said: “The development of a new river course will necessitate the loss of the Gulliver sculpture. Any solution involving the relocation of the sculpture is likely to destroy the sculpture.

“Although the loss of the sculpture is significant, the proposals for a new river corridor provide new art work.

Plans for the proposed Niddrie Burn restoration project are widely expected to be approved when they are put before the council later this week.

The 100-foot long statue was designed by murderer Boyle during his notorious stay at Barlinnie Prison.

Boyle’s autobiography of his battle with the authorities, A Sense of Freedom, won various literary awards and was made into a hard-hitting drama starring David Hayman.

On his release from prison in 1980, Boyle married his psychotherapist Sarah Trevelyan and now lives with second wife, British actress Kate Fenwick, in France.