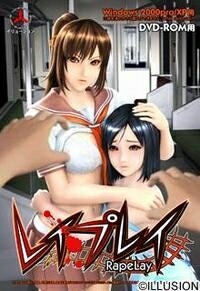 By Alexander Lawrie and Michael McLeod

RapeLay casts players into the role of a violent sex maniac, and centers on a male character that stalks and rapes a mother and her two daughters.

Now politicians have slammed the computer rape game after all UK outlets, including Amazon and eBay, banned people from buying the sick game in February

Since the UK-wide ban it has now leaked back onto the internet, with online sites such as Rapidshare and Files Tube offering it as a free download.

Reviews state that players can interact with virtual girls using the mouse cursor, and even gang up with up to five online gamers to attack virtual victims.

On hearing that RapeLay can still be downloaded for free, Mr Vaz said all parents should take note and supervise their children’s internet usage.

He said: “I am extremely concerned that the game Rapelay, which promotes violence against women, can be downloaded from the internet at the click of a button.

“Earlier this year, after I spoke in Parliament on the matter, Amazon withdrew this game from sale. I find it absolutely shocking that other internet sites have not felt compelled to do the same.

“It is appalling that children will be able to access this game with relative ease.

“A recent survey showed that nearly half of 8 to 11 year olds use the internet without adult supervision. I urge all parents to take notice and ensure that their children are safe when using the internet.”

The twisted game was released by Japan’s Illusion Studio three years ago, but continues to surface online.

A spokesman for the company said: “We believe there is no problem with the software, which has cleared the domestic ratings of an ethics watchdog body.”

The availability of the horrific game comes as police prepare to launch Operation Advance after it was revealed over 2,000 rape cases in Scotland remain unsolved.

The operation has already been declared a major success in England and is to be initially launched in Strathclyde before being rolled out across the country later this year.

The youngest victim of the unsolved cases involves a two-year-old toddler, while the oldest is a 99-year-old woman.

Scots police experts are now to use the latest DNA technology in an attempt to catch the rape beasts who are still at large throughout the country.

Latest figures show since 2000, 801 cases in Strathclyde remain unsolved while in the Lothian and Borders area 648 rapes have gone undetected.

Grampian region reported 303 rapes unsolved since 2003, and in Fife 75 cases are still to be solved.