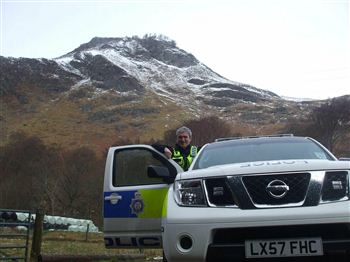 A SCOTS policeman who broke his neck after falling 200 ft down a mountain has made a miracle comeback and raised more than £30,000 for the organisations who helped save his life.

Michael Tunney was out walking with his 16-year-old son, also Michael, near to the Bridge of Orchy in 2006 when he slipped on ice and plummeted down the mountain breaking his neck, arm, hip and seven ribs.

Michael jnr. managed to contact the emergency services by mobile phone, but as he tried to reach his badly injured dad he too fell and broke bones in his hand before being knocked unconscious.

Now the courageous British Transport Policeman, who was forced to undergo three years of intensive operations and physio, has just completed an arduous 103-mile trek across the country’s highest peaks to raise money for the men who saved his and his son’s life.

Michael, 44, has now returned to full duties with the BTP even though doctors told him he may never fully recover from his horrific ordeal.

The money raised will be split between the Oban and Arrochar mountain rescue teams and the Northern Police Treatment Centre, Auchterarder, where the cop spent months of physiotherapy following his fall.

And climbing legend Sir Chris Bonnington has chipped in to help with the fundraising attempt by kindly donating signed photographs of himself to the fundraising campaign.

During his latest expedition, where he climbed Scotland’s nine peaks over 4000 feet, Michael admitted he had some “deja vu moments”, especially when he crossed the knife-edge Carn Mor Dearg Arete as he neared his final peak of Ben Nevis. 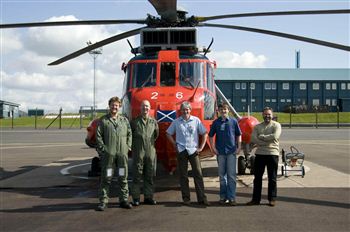 He said: “There were times when I thought ‘I can’t do this’ and the mental recovery has taken longer than I expected it would.

“But it was fantastic, and I achieved what I set out to do.”

The former-Met officer, and his son, now aged18, had to endure six hours on the freezing mountainside and were only rescued after the teenager heroically managed to guide the helicopter and rescue teams to their location using the light from his mobile phone.

“We both had mobile phones and managed to call 999 to get assistance. I knew we would be up there for a while, and as it turned out we were out on the mountain for over six hours.

“What the experience has given me is a sense of perspective about life – I now realise how lucky I am.

“I know it has also inspired others and there are people who have never even met me who get in contact or donate money.”