BOY-BANDS could soon become a thing of the past after a Scots group invented a new smart instrument.

Cybraphon could be the next step in the evolution of pop music as it has a working, digital brain with real emotions, and plays music depending on how it feels.

It was created by Found – an avant-garde musical collective and is completely self sufficient.

The Edinburgh-based group teamed up with a university professor to come up with the technology, which is set to go on show during this year’s Edinburgh Arts Festival next month.

Professor Simon Kirby, from Edinburgh University, said that the Cybraphon can feel emotions and is “completely obsessed with its own celebrity”. 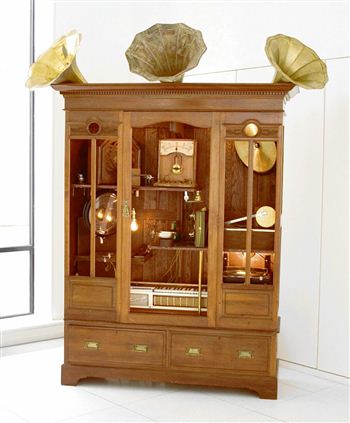 He said: “The obvious question is – what makes Cybraphon happy?”

“However, Cybraphon is insecure – it just wants more and more fame and publicit and if that rate of publicity falls, it will get upset again.

“In that way it’s basically a model of a modern Indie band.”

Inspired by 19th century mechanical instruments such as the orchestrion and the player piano, the Cybraphon is an interactive, mechanical band in a box.

The amazing machine consists of a number of acoustic instruments, antique machinery, and objects from junk shops, played by over 60 robotic beaters and motors all housed in an antique wooden display case.

And the brain-box band is so excited by their invention they plan to try and get it signed by a major record label. 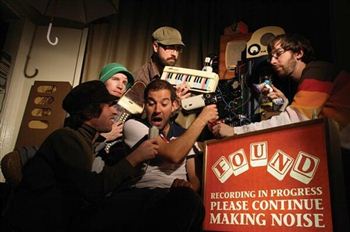 ally by itself, but what’s interesting about it is that it’s affected by the internet and by any internet activity that relates to it.

“Ultimately we want to try and get it signed – I think a label would get a lot of PR legs out of signing a wardrobe.

“There’s talk about maybe trying to take it over to Berlin.

“I don’t know how well it will travel, like most bands it will probably become unhinged as it goes on tour.”

The Cybraphon will be on display at the Inspace gallery in Edinburgh during the Edinburgh Arts Festival from 5 August to 5 September.