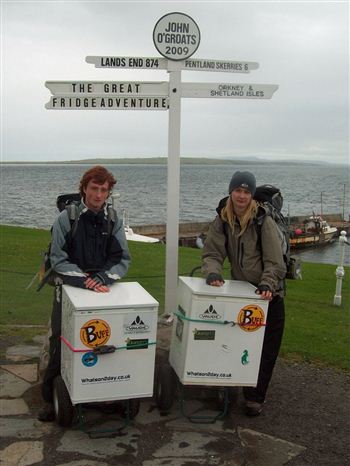 TWO wacky students are spending the next six months walking from John O’ Groats to Land’s End – with each pulling a fridge behind them.

Marcus Dean and James Miller, both 18, are making the long arduous journey in an effort to raise cash for the Alzheimer’s Society.

The intrepid duo will be walking up to 15 miles per day with their fridges and hope to be back home in time for Christmas.

The students, originally from Farnborough, Hampshire, have just completed their sixth form studies and are taking a year out before embarking on a university course.

Having made the long journey north by car at the weekend the super-fit pair will now walk the length of the British Isles and hope to raise around £10,000 for the needy charity.

Marcus said: “The idea was first borne after we both read the Tony Hawkes book ‘Walking Around Ireland with a Fridge’. It seemed a really fun idea and before long we were looking into how feasible it would be.

“We bought a couple of fridges and began our training around the South Downs. We’ve been walking about 20 miles a day with the fridges, but that was on really flat ground.

“I think walking in Scotland will be a very different matter.

“We can’t wait to get started and are really looking forward to seeing the beautiful scenery in Scotland. We’ve never been north of Edinburgh before so it’ll be a whole new experience for us.

“I just hope the weather and your infamous midges are kind to us.”

Marcus and James will spend most nights under canvas with the pair looking to stop at B&Bs once a week for a comfy bed and a wash.

The plucky teenagers are hoping to pick up donations for the Alzheimer’s Society from passers-by and members of the public as they make their way south.

James said: “The charity is close to my heart as my grandad has developed Alzheimer’s over the last few years. It’s been heartbreaking seeing his decline, but, hopefully, we can raise some much-needed cash for the charity.

“I think the Scottish public will be very hospitable and we’re both looking forward to seeing the country and meeting a lot of people on our travels.

“Our friends and family were very skeptical at first, but now they are all very jealous about what we are doing.

“It’s going to be a great big adventure and we can’t wait to get started. We know how friendly the Scots can be and hopefully they will welcome us with open arms when they see us out walking.”

Marcus and James will spend around two months walking their way through Scotland during their epic trip which started on Saturday.

“One in three people over 65 will die with dementia and there are people from Land’s End to John O’ Groats affected by this devastating condition.

“Funds raised by people like Marcus and James really help us to make a difference to the lives of people today while searching for a cure for tomorrow.”