A SEX beast who was jailed for abusing four young boys charmed his way into a family’s home before persuading a woman to send him pictures of two six-month-old babies. 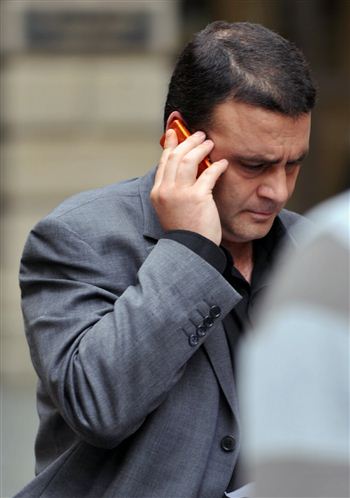 Kevin Riddle, 39, was jailed for seven years in 1998 after a jury found him guilty of a series of indecency offences against children as young as six.

Riddle abused the four boys over a 10-month period and was placed on the sex offenders register for life following his conviction.

But during a six-month period last year Riddle befriended a man and was invited into his home, where he had a baby boy.

Riddle also met another child, whose mother brought him to the first family’s home. He convinced her to send him pictures of both children on his mobile phone.

Cops monitoring Riddle – who was under court orders to stay away from children – found the pictures on his mobile and he admitted that he had been in contact with the tots.

And at Edinburgh Sheriff Court he admitted two charges of breaching a sexual offences prevention order by having contact with minors between June and December last year.

Fiscal depute Ruth Ross Davie told the court how Riddle had been jailed in May 1998 at the High Court in Edinburgh over lewd and libidinous behaviour and sodomy charges.

He was released on licence after four years of his seven year sentence.

But in 2005 he went missing and when he turned up in April 2007 he was caged for the remainder of his sentence before being released in November of that year.

In June 2008 he was made subject to sexual offences prevention order at Edinburgh Sheriff Court – this included strict rules that he must not go near any children.

But after befriending a man he wormed his way into their Edinburgh home and convincing a family friend to send him pictures of their children to his mobile.

“This happened on two occasions when Riddle was socialising with his parents at their home when the child was present.

“Also present on one occasion was another woman and her child.”

Miss Davie said at the time of the offences both children – who cannot be named for legal reasons – were just six months old.

Riddle’s sinister behaviour was discovered after officers who monitor him found images of the two children on his mobile phone.

Miss Davie said: “The breach was discovered as a result of Riddle being shown pictures of the children on the mobile phone of the second child and he asked her if she could send them to his phone, which she did.

“In December 2008 police officers were monitoring his order and were interrogating his mobile phone found two images of children.”

Riddle initially denied any knowledge of the photographs but later admitted he had met the children and asked to be sent them.

His solicitor Kenneth McFarlane said his client had not offended since his High Court sentence and that he was unsure of the rules of his sexual offences prevention order.

He added that Riddle had never been alone with the children in question.

Mr McFarlane said Riddle had given up a job in an insurance firm after discovering the business ran a crèche facility – stating that he wanted to avoid any “future difficulties”.

Mr McFarlane added that Riddle had given up this job despite being cleared to take it by police.

Sheriff Derrick McIntyre deferred sentence on Riddle, of Pennywell Medway, Edinburgh, until September for reports including a risk assessment.