THIS year’s Edinburgh Tattoo is on course to defy the credit crunch and put on a spectacular show on its 60th anniversary.

More than 1,000 performers will descend on the castle for the iconic military display, which will also feature the Brit Award-winning Royal Scots Dragoon Guards.

In line with tradition, the show will open and close with the much-loved Massed Pipes and Drums, which take on special significance in the Homecoming Year of Robert Burns’ 250th anniversary.

Singers from the Royal Scottish Academy of Music and Drama will join forces with the Calgary Burns Singers from Canada to honour the bard with a special musical homage.

The show will also feature a dramatic mock-rescue by the RAF’s emergency medical response team, as an interlude to the traditional musical fare.

Major General Euan Loudon, chief executive and producer of this year’s Tattoo, said that this year’s performance would have a markedly international flavour.

He said: “When the Tattoo started 60 years ago, it was a very narrow, Scottish-military event.

“Since then it’s continued to grow in terms of its international ambition and now there have been almost 50 countries performing at the Edinburgh Military Tattoo.” 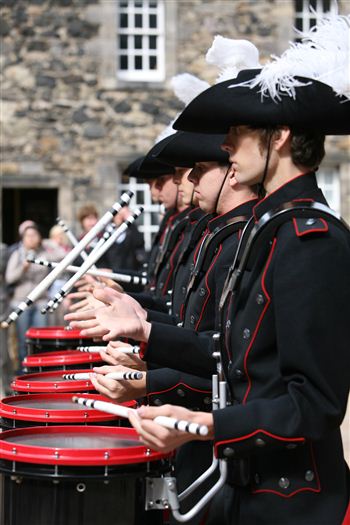 Major General Loudon was keen to emphasise the healthy future of the Tattoo, despite the threat of financial turbulence due to the recession.

He said: “In 60 years the Tattoo has never had any public money, and our sole aim as a charity is to raise enough money for next year’s show and donate the rest to armed services benevolence associations.

“So far, touch wood, there hasn’t been any difficulty with that.

“Fittingly, the original aim of the Tattoo was to cheer people up after the Second World War, and it’s adapted and evolved into one of the most iconic images of this part of the world.

“This year we’ve got people from the South Pacific making their second visit, and a troupe from Edinburgh’s twin Chinese city of Xi’an making their first.

“We’ve got two acts from Switzerland, one of which is the fantastically popular Top Secret Drum Corps- a fabulous act who burst onto the scene a few years ago.”

The Swiss group are back after appearing at the 2006 and 2003 Tattoos, and are looking forward to showing off their flag-waving, sword-fighting secret show – although drum corps leader Eric Juliard isn’t giving away anything else.

He said: “Most of what we do is, of course, a secret and I’m not going to tell everything we’re going to do, but with our dynamics and the visual side of what we do, this show is completely unique.

“The Tattoo world is a small one, but everyone in it knows that the Edinburgh Tattoo is the biggest in the world.

“The setting in front of the castle is amazing and it’s a huge honour just to come here and play – we’ve put more money into our display, with new uniforms and new routines.”

More than 200,000 Tattoo-goers will visit this year’s display, with more than 100 million watching on television.