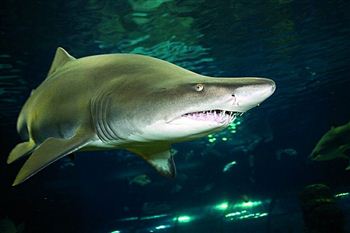 Tinkerbell, a 10 foot-long giant sand tiger shark, swims her way through the aquarium at Deep Sea World, North Queensferry, everyday and staff at the centre are planning a special treat to mark her landmark birthday.

Divers will today enter her 4.5 million litre tank and tempt her with a range of tasty treats.

And any visitor who can prove they are the same age as Tinkerbell will receive free entry to the popular tourist attraction.

But despite reaching a quarter of a century, Tinkerbell has a long way to go if she wants to be remembered as the world’s oldest sand tiger.

That title belonged to a shark called Bertha who lived at New York Aquarium until she died at the grand old age of 43.

“She’s a fantastic-looking shark and is extremely popular with all of the divers and the zoological team as well as with visitors.

“Despite her age she appears to be in absolutely fantastic condition and she’s definitely the matriarch of the Underwater Safari.”

Sand tiger sharks are usually found in tropical and temperate waters in the Atlantic, Indian and western Pacific Oceans,

They are also known as the grey nurse shark in Australia and raggy-toothed shark in South Africa.

In the wild they mainly live in shallow coastal waters from the surf zone down to 60 metres, although some have been recorded in water as deep as 190 metres.

Sand tiger sharks are constantly replacing their blunt, damaged or old teeth and it has been estimated a single shark can have up to 30,000 teeth in a lifetime. 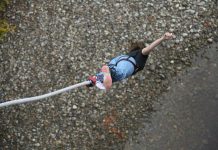 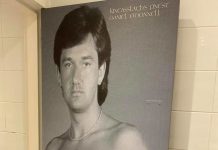