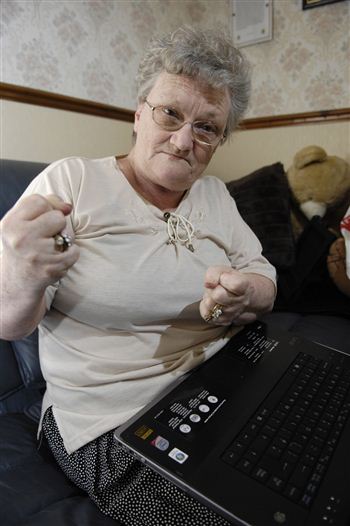 A FRAIL pensioner fought off a violent burglar after she caught him red-handed in her own home – while her husband slept peacefully in the next room.

Brave Maud Hayward, 70, discovered the young intruder trying to steal her prized laptop as she returned from walking her dogs.

The feisty OAP was punched in the face by the thug as she struggled to wrestle her property back.

After felling Maud with a right hook the teenage thug then ran out her front door before making his escape through her back garden.

Husband Brian, 73, who was recently fitted with a pacemaker, was sleeping in the next room.

Maud was out on a 5am walk with her two Yorkies on Monday morning when she was confronted by the hooded thief at her home in the Carricknowe area of Edinburgh.

Punched in the face

She said: “I always take my two dogs for their early morning constitution, but I couldn’t believe it when I came home and saw my front door open.

“At first I thought I must have left it open by mistake, but when I opened it there was a young man, about 18 or 19 years old, standing there with my husband’s laptop.

“It cost a bloody fortune and there was no way I was letting him have it.

“I tried to grab him and shout for my husband to come and help but he just punched me in the face.

“As he thumped me I fell backwards and out the front door, landing on the paving stones outside.

“The coward then just ran off without even worrying about me. I could have had a broken jaw or anything – he just didn’t care.

“By the time Brian came to my aid the lad had gone.

“Thinking about it now I probably shouldn’t have challenged him, but the adrenalin just kicked in, I suppose.”

The suspect is described as 5ft 8ins to 5ft 10ins tall, with short black hair, a pale complexion, and wearing black clothes.

Chief Inspector Alison Strachan, of Lothian and Borders Police, said: “This was a terrible attack on a vulnerable 70 year-old lady in her own home.

“Although nothing was stolen that was because to the bravery of the lady, but we would not recommend members of the public challenge any intruder.

“We are currently following a few positive lines of inquiry and would stress to people to lock their doors and windows when leaving their home, or going to bed.”

CI Strachan also revealed that there had been several similar instances of slip-in thefts during the early hours of the morning in the Carricknowe area.

Several houses have been entered recently, and at the weekend one homeowner woke to find his car missing from his drive.

A police spokesman added: “While she wasn’t badly injured, the victim was understandably distressed as a result of her ordeal.

“We are appealing for anyone who was in the vicinity of Carricknowe Loan at around 5pm yesterday morning, and noticed anyone behaving suspiciously, to contact police immediately.

“At this time we would urge residents to guard against unwanted intruders, and to make sure their doors and windows are secure before leaving their homes.”