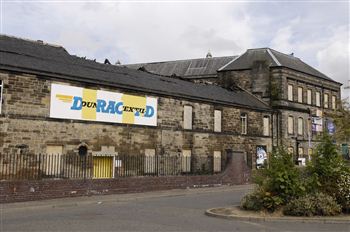 A PROPOSED multi-million pound urban village regeneration plan at an historic factory site has gone up in smoke.

The derelict Duracord factory site has been badly damaged after a large scale blaze broke out in the early hours of yesterday (tues) morning.

Police have arrested three men from West Fife in connection with the blaze.

The unused category A building in Dunfermline, Fife, was last year earmarked for a major transformation after plans to build 79 flats, shops, restaurants, offices, crèche and a textile museum were approved by Fife Council.

But developer Linklever Ltd was forced to put their plans on hold after the council demanded almost £1 million.

Police were called out to a possible break-in at the building following a call from the public at around 4.50am on Tuesday.

On arrival officers noticed smoke pouring out from the historic three-storey building’s roof – parts of the former-mill date back 200 years – and eight fire appliances were eventually called out to deal with the fire.

Firefighters immediately sealed off streets surrounding the site in an effort to contain the blaze which lasted around four hours.

A building inspection team from Fife Council is expected to make sure the building is safe before a fire investigation can take place.

A new six-storey block of flats was also being considered as were plans to retain the old factory chimney.

Fife Council was looking for a £984, 750 contribution from the property developer for permission to build on the listed site.

The council wants £118,500 for education as the development would bring a number of children into the catchment areas of schools which already have capacity issues.

The shortage of off-street parking in the plan prompted a request for £175,000 to improve transportation facilities in the city centre.

And, because the developer would rather pay a “commuted sum in lieu of providing affordable housing units on site”, the council is asking for further £691,250.

This is because 25 per cent of the proposed 79 flats should be “affordable housing”, with housing services and the district valuer setting a figure of £35,000 per unit.

Building appears to be safe

Stephen Fairley, building standards and safety lead officer with Fife Council, said: “We inspected the building this morning. The overall structure of the building appears sound but we have advised the owner that they will need to appoint a structural engineer to carry out a full assessment.

“Although there has been damage to the roof, the vast majority of it is still intact and a significant amount of remedial work will need to be carried out by the owner to make the building wind and water tight.

“At this point in time there is no reason to believe that the building will need to be demolished.
“The affected part of the building is separated from public areas by a secure yard and car park. Consequently, there should be no resultant risk to members of the public.”

Earlier this year, it was announced the National Theatre of Scotland was to hold a special performance at the disused factory site as part of an NTS’ community theatre project called Transform.

The factory was occupied by Dunlop, and latterly Duracord, who made tyre chord at the site until it finally closed in November 2005.

Fife Police Chief Inspector Scott McCallum said: “We are treating this fire as suspicious and would appeal to the public to come forward with any information they may have regarding this fire.”