Newly-born chicks saved from the scrapheap 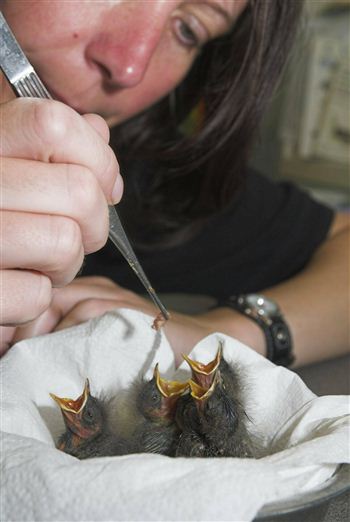 FOUR tiny wagtail chicks were saved from the scrap heap after eagle-eyed staff at a Scots salvage yard spotted them just in time.

The SSPCA swooped in to save the birds lives after receiving a call from J. Noble Salvage Yard in Kirkcaldy, Fife.

The Fife scrappies had taken delivery of a transporter full of bashed up cars when a worker caught sight of the tiny nest buried in a Rover engine.

The birds had survived a bumpy 48 hour ride on the transporter as it made its way up from Sandtoft, near Doncaster.

Scrapyard boss Peggy Noble, 40, said: “We couldn’t believe our eyes when we opened up the bonnet of the car. We usually check the scrap cars when they arrive, and thankfully we spotted the birds in time.

“The poor wee souls were cheeping away, obviously starving and missing their mother.

“I immediately called the SSPCA and they told us to feed them bread crumbs, water and sugar – they couldn’t get enough of it.

“How they survived that trip on a transporter I’ll never know, anything could have happened to them.”

Around the clock care

The tiny wagtails were soon whisked off for round the clock care at the animal charity’s centre near Dunfermline.

Colin Seddon, manager at the wildlife centre, said: “It’s likely that the car had been standing idle for quite some time to enable the wagtails the time to build their nest hatch their chicks.

“They are very lucky to be alive given that they have been separated from their parents and transported on a lorry in a car that was destined for the scrap heap.