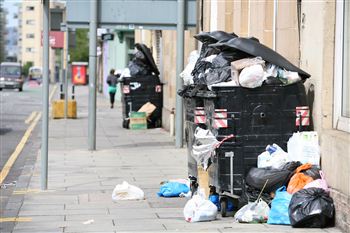 AS BINS across Edinburgh spill over into the street, the city council are trying to ensure the public that they are doing everything they can to tackle the stinking backlog.

But in the leafy suburbs of Morningside and the Grange, where the city’s more famous residents reside, there is no sign of the waste that is piling up elsewhere.

The pavements outside the houses of the shamed banker Fred Goodwin and Harry Potter author J.K. Rowling are clear of rubbish, whilst communal bins overflow outside the busier city centre tenements.

And Edinburgh City Council yesterday revealed they have now hired more private contractors to try and get the city clean again in the week before the festival season starts.

Try and keep up

The local authority have already moved staff off of trade waste and recycling to desperately try and keep up with household collections.

And a group of 40 temporary staff have been recruited to help get the collection services back to normal.

But despite the ongoing dispute, some of the city’s residents have been unaffected by the industrial action.

One Colinton resident said: “I didn’t even know there was a strike on. Our bins have been emptied twice a week for the past six weeks like normal.”

It is the communal bins of tenements that have been hit the hardest, with some finding that frustrated businesses have been dumping their waste in householders bins.

Another local said: “It stinks. You can’t move for the mess. This just in time for the tourist season too. It’s a disgrace. They should just get around the table and sort something out.”

Council Leader Jenny Dawe said: “It is still my hope that we will be able to achieve a resolution to the current situation that will see our staff back working normally.

“However, residents and visitors should not have to put up with unacceptable cleanliness standards. That is why we have put in place a range of contingency arrangements to tackle the backlog in refuse collection and street cleaning.

“In talks with the Unions tomorrow I will be reiterating that we want to work with them to ensure that all our employees have all the necessary facts and figures.

“It is essential that they understand that we have plans to avoid the substantial reductions in pay that are being reported in the media.”