A GROUP of Scots graffiti artists and street painters have taken over the stately Scottish National Portrait Gallery.

The home of some of Scotland’s most important historical figures has been given a radical makeover with spray-cans, fly posters and projectors.

The drastic transformation is part of a three-week exhibition to go on display during Edinburgh’s festival season, showing a dramatic re-mixing of Scotland’s history alongside timeless portraits of the likes of Robert the Bruce and Bonnie Prince Charlie.

James Holloway, director of the Scottish National Portrait Gallery, said: “It’s quite extraordinary – the gallery that I’ve been trying to keep clean and tidy has been taken over by a bunch of street artists.

“They’ve made a complete transformation, and what they’re really doing is bringing contemporary styles into the gallery and re-interpreting some of the figures we’ve got on our walls.

“When you look around, you can see extraordinary images of the type you might find on railway embankments and things like that.

“But this is in the Scottish Portrait Gallery so it’s both very surprising and absolutely fantastic.”

The project has been developed during a planned two-year closure of the gallery while major refurbishments take place.

Nearly 20 artists have descended on the 100-year-old building, using a mix of styles to represent their own vision of contemporary Scottish life. 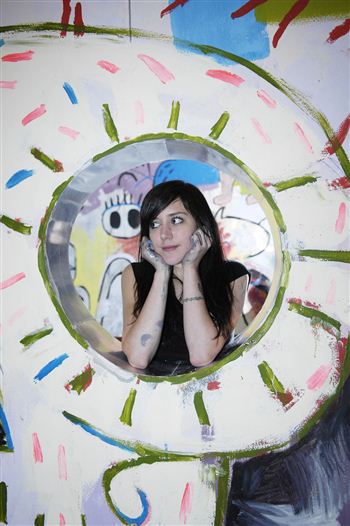 The installation opens on the 7th August, and features the full armoury of street-art techniques, including spray-paint, stickers and stencils.

“We’re trying to tell the story of Scotland, and explain the Scottish psyche as we see it.

“One of the women featured here had some serious health problems, but recovered from that and now has voluntarily helped hundreds of people with similar problems.

“There are hundreds of people like that in Scotland that never get represented.

“We want to highlight some of these characters – they’re the people that make this country.”