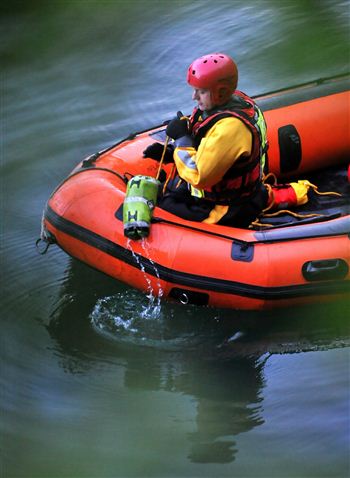 THE GRIEF-STRICKEN family of a schoolboy who drowned while swimming in a disused quarry had the heartbreaking task of formally identifying his body today.

Tragic 15-year-old Daniel Steedman, from Kirkliston, West Lothian, died while playing with friends at the Humbie Quarry near Winchburgh on Thursday evening.

An RAF chopper from HMS Gannet at Prestwick joined specialists teams of police divers, coastguard search teams, police and fire-fighters after the alarm was raised shortly before 6pm.

His lifeless body was recovered by police divers at around 11pm, some five hours after two friends he was with raised the alarm.

The two boys who were with him, thought to have been fellow pupils from Queensferry High School where Daniel attended, were being offered counselling yesterday.

One of the surviving boys is understood to have tried to save Daniel before losing his grip in the remote water pool said to be 100ft deep in places.

Tributes from friends were began appearing on the popular Bebo website within hours of the news reaching the shattered community.

One read: “Why did you have to go mate? This isn’t fair. I’m gonna miss you so much. Life won’t be the same.”

Another added: “Daniel, you will always be in my heart until the day I see you again. I love you.”

Locals said the quarry was an accident waiting to happen.

Ian Simpson, 34, a car mechanic from Broxburn, West Lothian, said: “It’s too easy to get into the quarry. All the kids swim there. It’s very dangerous.

“There are cliffs all around it and the water gets to be about 100ft deep. There are lots of plants and weeds below the surface.”

Lothian and Borders Police confirmed the body had been found.

A spokesman said: “Following a search of the quarry by police divers the body of a young male has been discovered.”

The death isn’t the first to blight the otherwise quiet part of West Lothian.

Less than half a mile away is Hopetoun Fishery – previously known as Hopetoun Quarry – where memories of a chilling earlier horror have been dredged-up by this latest tragedy.

In 1911 Patrick Higgins was given custody of his sons John, seven, and William, four, after the death of their mother three years earlier.

But he had been unable to cope with raising them and was jailed for child neglect.

However on his release he continued to struggle and eventually left the boys in the care of a friend.

But one night in October 1911, witnesses said they saw Higgins leading the boys towards the quarry.

They were never seen alive again before their bodies were found two years later.

The bodies of the children were eventually found by ploughman Thomas Duncan and his friend James Thompson in June 1913. 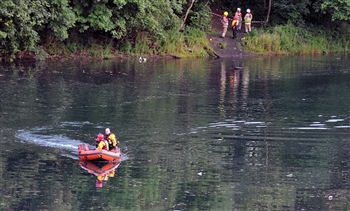 After Higgins identified them, he was arrested and tried for murder.

Despite a plea of temporary insanity, he was found guilty and sentenced to death.

And in 1913 he was hanged – the was the first man to be executed in Edinburgh that century.

The water had left the bodies of his children so strangely preserved that University of Edinburgh pathologists kept some remains for study.

The boys were only laid to rest just three months ago – almost a century after their death.

In May they were cremated in a funeral service after a request from relatives in the United States.