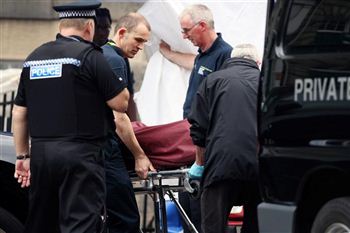 THE BODY of a man was found lying in the basement garden of an exclusive Edinburgh townhouse as early morning commuters made their way to work yesterday.

A shocked passer-by reported finding the man lying on steps at the plush North Castle Street address at around 7am.

Officers from Lothian and Borders Police arrived to discover the twisted body at what was described as an “awkward angle” and immediate sealed off the area.

Blue and white police tape was strung up around the unoccupied five-story townhouse building at 57 North Castle Street as a full investigation began.
Shocked workers arriving at nearby shops and offices were greeted by the sight of uniformed officers and white suited forensic officers hunting for clues over the cause of the death.

Teams of experts spent all day examining the remains while a senior officer led inquiries around adjoining properties. 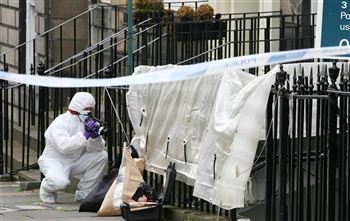 Detective Inspector George Thomson of Lothian and Borders Police said investigations were ongoing, but that it was too early to speculate on the cause of death.

He said: “At 7am this morning a member of the public found the body of a male lying in the front garden of premises on North Castle Street.

“Emergency service arrived at the scene but I can confirm that the man was deceased when found.

“It’s too early to say what the cause of death is.

“I can tell you the man was lying at a particularly awkward angle.

“It is too early to tell whether this was an accident.”

The man’s body was found two doors down from the Spanish Embassy at the heart of the city’s affluent New Town.

The incident happened a few down from Walter Scott’s historic house and just around the corner from the Oxford Bar, famously the haunt of Ian Rankin’s detective series Rebus, and opposite upmarket property dealers including George Goldsmith Exclusive Properties and Sporting Estates.

The lower half of the property, which was previously used for commercial purposes by the local council, was being marketed by Rettie estate agents for £525,000 and was under offer.

Many locals and workers in surrounding offices spent the morning peering through the rain from their windows watching the investigation unfold.

Chris Rourke, managing director User Vision, based next to where the incident took place, said: “It is unsettling that something untoward like this would happen in this area.

“It will be a relief to know what the cause of the incident was.”

Another worker at a neighbouring sandwich shop said: “There were several fast response cars, three of them, there when I got to work at 7.45am.

“The forensic guys in white suits were already there. It’s a pretty affluent area. You don’t expect this kind of thing around here.

He added: “I think it’s more likely that someone has just fallen down the stairs.”

Shortly after 2pm the figure of what appeared to be a large shaped man, wrapped in a dark red body bag, was loaded into a black private ambulance which sank down slightly as he was laid down.

Police were last night still trying to establish the identity of the man, with experts dusting the railings outside the townhouse for finger prints.

A statement was expected to be released by Lothian and Borders Police in due course.