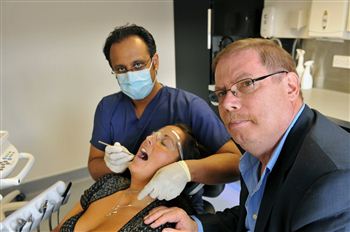 A HYPNOTIST has been hired by a Scots dentist to help patients overcome their biggest fear – the dreaded filling.

Instead of suffering the traditional painful needle, patients will have the recesses of their subconscious probed by mind-control guru Peter Davies.

Edinburgh-based Lubiju’s unique approach to painless treatment is thought to be the first time a hypnotist has been used by a dentist in Scotland.

The recently-opened £750,000 practice in Leith has already attracted top medical consultants in anaesthetics, cosmetic dentistry, oral surgery and implantology.
The practice is the brainchild of Scots dentists Dr Biju Krishnan and Dr Lubino do Rego, who met while studying at Dundee University.

Edinburgh father-of-two Dr Krishnan said the appointment of Peter Davies will make going to the dentist easier to swallow. 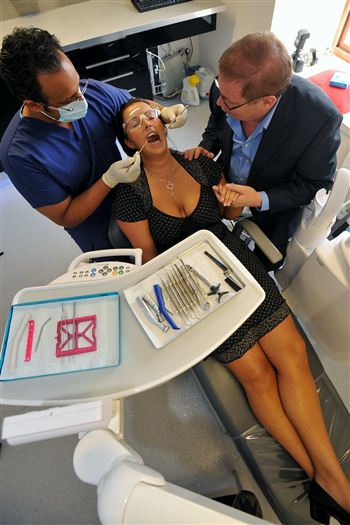 He said: “Many people still associate a visit to the dentist with a painful experience.

“It may seem unusual to have a hypnotherapist at a dental practice. However, what is clear is that fear of dental treatment can have very wide and far-reaching implications indeed – so it makes perfect sense for us to being doing everything we can to tackle that.”

“It’s estimated that 12 per-cent of people in the UK have such a fear of dentists they refuse to go under any circumstances – that’s around seven million people putting up with painful and problem teeth.

“What the hypnotherapy offers is that it puts the person back in control of those fears, it lets them feel that they are in a safe place and in control.”

Lubiju also aim to tackle Scotland’s record of decay by using totally pain and needle free treatments including expensive handheld lasers which allow them to identify areas of corrosion invisible to the naked eye.

The surgery is fitted out with three state of the art treatment suites, each with a designer flat screen TV on the ceiling, so patients can watch DVDs during longer treatments such as laser tooth whitening.