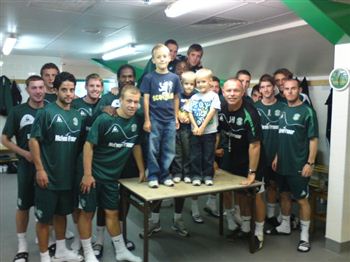 A FIVE-YEAR-OLD boy who had his face ripped open in a savage dog attack has been treated to a special day out as a guest of his favourite SPL football team.

Andrew Osborne spent time rubbing shoulders with his Hibernian football heroes after the club invited the family to be guests of honour at their Open Day.

Along with twin Matthew, older brother Jamie, eight, and mum and dad Craig and Barbara, little Andrew was delighted to be welcomed into the team dressing room on Sunday to meet star such as Derek Riordan and Merouane Zemmama.

Kind-hearted Hibs boss John Hughes then showed the family around the stadium before settling down in the home dugout for a chat and some photographs.

Dad Craig, 35, admitted the three youngsters were nervous at meeting the team, but was delighted at the “lovely welcome” the family received from the club.

He said: “It’s been a marvelous day and the boys were so thrilled to meet the players and the manager.

“They even got to go into the dressing room which, I’ve been told, doesn’t happen very often.

“I can’t thank the club enough for what they have done – it’s been a fantastic experience for all of the family.”

Manager John Hughes said: “It was a pleasure to welcome the Osbourne family to Easter Road, especially after what happened to little Andrew. It must have been a terrible time for all the family.

“It was just lovely to see a smile on his face.”

Hibernian officials presented young Andrew with his very own strip and are treating the family to a day out at a league match when the season begins in just under a fortnight. 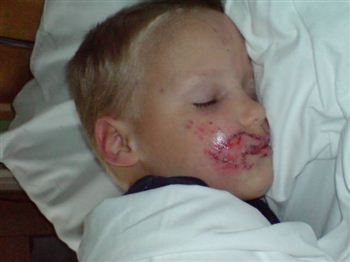 Andrew was the victim of a vicious dog attack as he and his two brothers played outside the family home in Easthouses, Dalkeith, Midlothian in May.

The brave youngster had 34 stitches inserted as he underwent three operations to save his face.

Following the attack, mum Barbara, 35 admitted her home looked like “a murder scene” as she called for an ambulance.

The family has been told they face a year-long wait to find out if Andrew will be scarred for life.

The dog which belonged to a nearby neighbour was quickly tracked down and had to be out down.