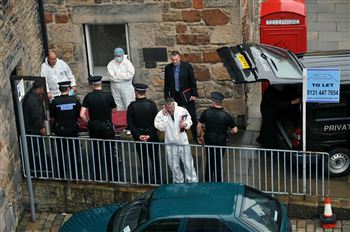 A SCOTS pensioner thought to have been murdered by her suicidal son had been strangled and beaten around the head, it was revealed yesterday.

Details of the injuries inflicted on Valerie Rockall, 80, from Dean Village in Edinburgh, have been listed in her official death certificate.

She was found dead beside her son who had hanged himself.

Mrs Rockall’s son Brian, 44, is likely to be named as the sole suspect in the case with a report expected to be completed by police this week.

Mrs Rockall’s body was discovered in a flat in the exclusive Dean Village area of Edinburgh on July 20.

Her death certificate states she died from “head and neck injuries and neck compression”.

The details rule out previous reports that the former secretary was viciously and repeatedly stabbed to death.

And according to his death certificate, Brian Rockall died from “suspension by ligature”.

Lothian and Borders Police are currently investigating the theory Mr Rockall killed his mother after a row about his massive gambling debts.

It is thought he used his mother’s savings and pension to fund his online habit.

His death certificate lists Mr Rockall’s occupation as a “stock market trader” fueling speculation some of his debts may have been run up playing the financial stock market.

A police spokesman said: “The investigation is now nearing a conclusion and a report is expected to be sent to the procurator fiscal by the end of the week.”

Detectives have said if Mr Rockall is named as the killer and the evidence presented is accepted they will consider the case closed.

And once the Procurator Fiscal has made his final decision the bodied will be released to family members.

But officers investigating the murder suicide case have struggled to track down any remaining next of kin, although a very distant relative was located in Essex last week.

Brian Rockall appeared as a witness at the trial of Sean Flynn who was accused of murdering his mother, Louise Tiffney, 43, in 2005. The pair lived directly upstairs from the Rockalls.

Ms Tiffney disappeared after leaving her home which she shared with her teenage son and six-year-old daughter in May 2002, but her body has never been found.