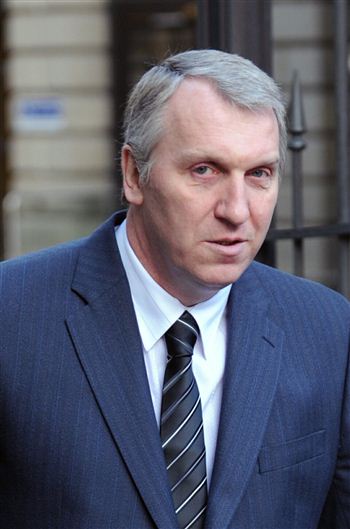 A GYMNASTICS coach squeezed youngsters’ bums to check they were warming-up for exercises properly, a court has heard.

Mitchell Dolphin, 51, would ask young gymnasts to clench their buttocks as part of a warm-up for doing the splits, according to a former student who claims he sexually abused her.

Giving evidence at his trial the woman also claimed Dolphin would cuddle a “protégé” aged as young as 12 and sit her on his knee, playing with her hair, while he spoke to other gymnasts.

Two other girls who were also trained by Dolphin, said he kissed one of them on the lips when she was between seven and nine years old and both claimed he used stretching techniques which left them “exposed.”

Dolphin faces 22 charges of lewd and libidinous behaviour and sexual assault against over a dozen boys and girls going back as far as April 1986.

The offences are alleged to have taken place at a gym he ran in Loanhead and also at Lasswade High School as well as other places.

Dolphin was arrested on April 1 last year and denies all the charges.
But yesterday (Wednesday) at Edinburgh Sheriff Court a woman who had been coached by Dolphin at his LO-GY gymnasium in Loanhead told a jury that he would squeeze children’s bottoms during every warm-up at the gym.

The 30-year-old, who cannot be named, said she moved to Dolphin’s gym when she was just 12 or 13 years old after six years at another centre.

She said that after joining the gym she quickly found that it was considered normal for Dolphin to squeeze the young gymnasts’ bottoms while warming up for a “box split” exercise.

Now working as an events manager, she said: “During the warm-up for the box splits, for want of a better word you would clench your bum-cheeks.

“Mitch would come round and check by hand that you were doing it properly. The word I would use is he would squeeze your bum-cheeks and make sure you were tight.

“It was a general part of the warm-up. There were various people he was checking to make sure they were not slacking-off.”

Although the woman said other coaches had asked her to clench her bottom as part of warm-up, she said only Dolphin had actually squeezed her behind to check she was doing it.

The woman – who was aged between 12 and 16 during her time at Dolphin’s gym – also said the coach singled out her younger sister as his “protégé”.

She said: “I saw (the girl) almost as his protégé. He would pay (her) a lot of attention.

“(She) would be sitting on his knee and he would play with her hair. She would only have been coming up for 11.

“Now, looking back, I am just aware of how much attention he paid her. I have visions of him standing behind her with his arm wrapped around (her).”

After the woman left the gym she would still return to collect her younger sister who had continued training with Dolphin.

She said she would often arrive late and find the gym locked with her sister at Dolphin’s nearby home.

The woman said this happened on several occasions and on one occasion when she had even been early she again found the lights at the centre off and her sister – then aged around 15 – at Dolphin’s home.

Two other sisters who were also members at the gymnasium during the early nineties also gave evidence.

One described an incident where Dolphin had tried to kiss her on the lips.

The 30-year-old said: “I was between seven and nine years old.

“I remember he came to kiss me on the lips, unfortunately it was around the same time that I was learning about snogging and French kissing.

“I just remember there was alight atmosphere and we were all having fun. I was expecting a peck on the cheek or something and that would not have worried me.

“I would not have been surprised.”

But when the youngster – who said she was hanging from parallel bars at the time – realised that Dolphin was aiming at her lips she tried to “do something disgusting”.

She said: “I stuck my tongue out but he was already there.”

The woman said she stuck her tongue out to put Dolphin off trying to kiss her.

The same woman – and her sister – both described stretching exercises that Dolphin had performed on them when they were aged around 11.

They said that the exercises made them feel “exposed” and uncomfortable but admitted that when they asked Dolphin not to do it again he stopped.

Dolphin was also described by all his former pupils as a strict coach who had high ambitions for his athletes.

He claims that all the stretching exercises were innocent.

The trial – before Sheriff Frank Crowe – is expected to last four weeks.

Scots prefer to lock lips with a minty kiss