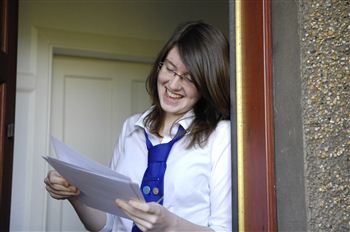 IT was top marks for Scots pupil Catherine Rankine yesterday (Wednesday) as she scored straight A-grades in her advanced Higher exams.

Thousands of Scots teenagers were nervously awaiting their exam results in the post yesterday, with a record 160,000 discovering they had passed their tests.

The 17-year-old Firrhill High School pupil is now one of the best qualified 17 year-olds in the country.

She added an amazing four A-grade Advanced Highers to her already impressive haul of six A-grade Highers.
And despite the opportunity to study at any university in the land, she shunned the likes of Cambridge University to enrol at Sheffield University – one of the only institutes offering her chosen Structural Engineering and Architecture course.

She said: “I’m very relieved and it’s great news because it means now I can go to study in Architecture and Structural Engineering at Sheffield.

“It’s my friend’s birthday so we were going to a party anyway – but it’s great to be finally finished and be able to relax.”

Last year Catherine sat six Highers in art and design, chemistry, computing, English, maths and physics – and gained A passes in all of them.

This year she sat the Advanced Higher exams in applied maths, maths, art and design and physics – again gaining top A passes in all.

But the ambitious pupil still made time to study Mandarin Chinese and has already planned to continue learning the language at Sheffield University.

She said: “It would be great to go back to China and take my friends with me next time.”

“And it’s a great place to learn about architecture. It takes five years to complete a tall building here – but only takes a year in China.”

“Cambridge gave me an offer but I decided to go with Sheffield because it offers the dual honours course I want to do.

“Cambridge is very pretty and all colleges there are lovely but I think Sheffield is the best place for me.

“It’s weird because when I’ve been at school I’ve always been at the top classes but I’ve never thought of myself at the best in the city – let alone in Scotland.”

She added: “I think I’m ready for university, my brother has been already so I’ve got a bit of an idea what it’s going to be like.

Firrhill’s head teacher, John Wood, said Catherine is one of the best pupils he has ever seen.

He said: “We are delighted with Catherine’s set of results – four Advanced Highers at grade-A is a tremendous achievement.

“She even managed to find time to help others as a mentor for junior pupils and through her role as a prefect.”

An Scottish Qualifications Authority spokeswoman added: “We can’t say definitely that Catherine’s are the best results – but it’s fair to say that they’re one of the best in Scotland.”

But Catherine’s success came while fears were raised that many pupils in Scotland are being let down by the education system.

Conservative MSP Liz Smith, Shadow Minister for schools claimed too few pupils are coming out of schools ready for university or the workplace.

She said: “I warmly congratulate all those pupils who have been successful in achieving their examination passes – much deserved for dedicated application to studies over the duration of their coursework.

“But there are still concerns from employers, colleges and universities that the exam system is not consistent with their demands.

“In March we found out only 30 per-cent of Scottish S2 pupils are reaching satisfactory standards in maths.

“We want more rigorous testing of basic skills in reading, writing and arithmetic by the time a pupil reaches the end of primary 7, a call backed by the Scottish Parliament.

“By addressing these issues earlier, youngsters are better prepared to make the most of their future.”

But a spokesman for the Education Institute for Scotland insisted Scotland’s educational foundations and framework are “solid.”

They said: “This year’s results also that Scotland’s qualifications framework remains robust and continues to support Scottish education and allow pupils to earn certificates that are valued by employers and higher education providers.

“While it is always difficult to compare trends in exam results due to varying levels of difficulty each year, it is clear that Scottish pupils have delivered a very solid set of results in their examinations this year.”