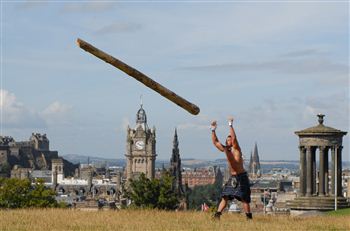 FESTIVAL-goers in Edinburgh have been taking a break from theatre and the arts – to get their bums signed by the Chippendales.

The Las Vegas lotharios are about to start a 27-night show expected to sell out every night at the Gilded Balloon venue.

But the strapping strippers have ruled out sampling the city’s haggis, saying it would upset their strict training regime.

Chippendales’ spokesperson reckons the flesh-filled show is the perfect balance to the arts side of the festival.She said: “The preview show was nearly sold out – and that’s always a good sign.

“The women of Edinburgh were going wild for the guys’ vests as they ripped them off and threw them into the audience.

“It’s a bit of a challenge as they’re used to having their own entire theatre back in Vegas, and they’ve to manage 16 costume changes in one hour and it’s a bit tight.

“I’m also going to have to get them down to the gym while we’re here – all they’ve eaten so far is kebabs.

“There were no mistakes on the first night – but one of the guys did come out wearing the completely wrong costume.”

The Chippendales are based at the Rio Hotel on the Las Vegas Strip most of the year but the Festival team is one of an handful of 10-man teams touring Europe.

Between the four teams of Chippendales, they go through 12,200 items of clothing every year including 1,600 white collars.

And each member of the team has to find time to spend 1100 hours in the gym every year to keep up their physique.

Kevin Cornell, 31 – who leads the ten-strong team of musclemen – hopes the Festival is ready for his show.

He said: “We hope that people don’t think that it’s raunchy or anything – it’s a really classy show.

“It was a great first night – I’ve been to Edinburgh before but I don’t think any of the other guys have, so it’ll be a great experience.

“No-one threw their panties at us but we did sign a few bums and there was definitely some cheek on show.

“We haven’t heard of haggis before but I’m gonna try some of that today – although it doesn’t sound like it would fit in with our set diet that well at all.”