FEARS are growing for a missing family of beavers in Argyll – and police fear that one may even have been SHOT.

There is increasing concern for the family, which was historically re-introduced to Scotland along with eight other beavers earlier this year.

The adult female disappeared only two weeks after the Scottish Beaver Trial re-introduced the family.

And it is feared that the female’s disappearance may be connected to an illegal shooting heard in the same area.

Experts believe the sudden disappearance of the female unsettled the adult male prompting it to move away from the area.

They further believe that the baby beaver – now abandoned – has instinctively followed the male’s scent, resulting in the disappearance of all three.

The Scottish Beaver Trial, who released the family in May of this year, is using a combination of methods to track the animals down. 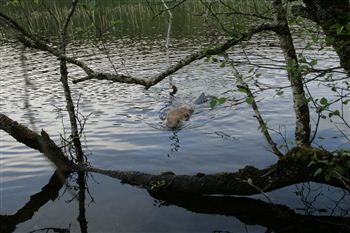 The beavers are tagged with transmitters and experts are monitoring radio signals in the hope that the animals, not seen in the wilds of Scotland for 400 years, will soon be found.

Simon Jones, project manager at the Scottish Beaver Trial, said: “We are obviously concerned that there could be a link between her disappearance and the unauthorised shooting – and the local police have been informed.

“Field staff and volunteers have been working around the clock in an effort to track the missing beavers.”

The beaver family was released into the wild as part of a project along with two other beaver families – and the remaining eight animals are reported to be doing well.

Allan Bantick, chair of the Scottish Beaver Trial partnership, said: “We are thrilled that two families of beavers have settled into their new surroundings so quickly.

“I very much hope that the missing female from the third family has not been shot and await the result of the police investigation.

“In the meantime the trial is fully underway and the scientific monitoring has started in earnest.”