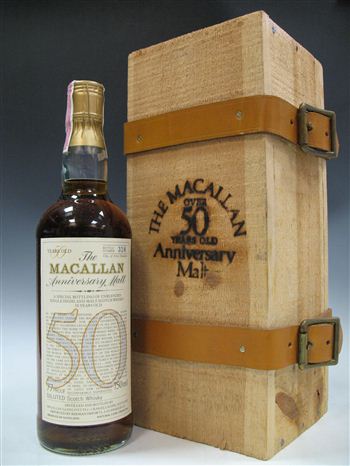 A SINGLE bottle of Scotch whisky has sold for a staggering £11,750 – making it one of the most expensive whiskies ever sold.

The bottle of Macallan Anniversary 50-year-old was sold to a Californian private collector after an auction in Glasgow on Wednesday.

The edition is a bottling of three casks distilled between 1926 and 1928 and comes with a letter of authenticity.

The sale took place at McTear’s Rare and Collectible Whisky Sale, which is held quarterly in Glasgow and frequently sees whiskies fetch thousands at auction.Andrew Bell, McTear’s whisky specialist, said: “We knew that out of almost 600 different lots the Macallan Anniversary 50-year-old was the stand out bottle in the sale and it’s quite clear that others agreed.

“Whisky collectors from across the world joined the sale by phone and through the internet and the price paid is a reflection of its importance to collectors and investors in whisky.”

The sales also included a 60-year-old Royal Brackla which sold for £3800 and a limited edition 1965 bottle of Ardbeg, which sold for £3000 complete with glass museum case, cleaning kit and white gloves to handle the bottle.

At the previous sale in May, a rare miniature bottle of Springbank 1919 sold for £1,800, breaking the miniatures world record.

But the sale on Wednesday didn’t make a dent in the current record – the Macallan Fine and Rare Collection 1926 60-year edition fetches an eye-watering £22,600.

The oldest and most sought-after of the Fine and Rare Collection is now sold out, but the Old Homestead Steakhouse in Atlantic City will serve a dram for £1960.