Film fans being spied on by night vision goggles 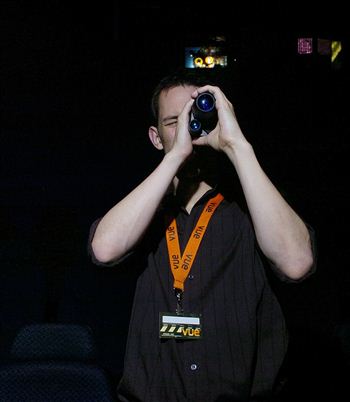 Bosses at a Scots cinema have ordered staff to spy on customers using night vision goggles in an audacious bid to clamp down on movie pirates.

Staff at the Vue cinema in Edinburgh are sent in at least three times during a film’s performance to scan the audience for illegal recording.

Advances in technology have meant pirates are far harder to detect, but the new £350-a-pair goggles can locate anyone in the auditorium using a hidden camera or mobile phone.

The move to crack down on film piracy has been backed by industry experts, but some customers have voiced their concerns about the high tech device.

Jayne Rooney, manager at the Vue cinema, said: “It is no longer the case of looking for a little red light. We have developed a training programme that provides focus on knowledge about equipment techniques, concealment techniques and deterrent techniques looking at behavioural traits which may indicate a problem that needs further investigation.

“We would expect around three checks to be completed per film. It is important to make sure that staff are always on their toes.”

And Eddie Leviten, head of communications at the Federation for Copyright Theft, said: “The source material for the majority of private DVDs and illicit files on the internet is a camcorder in a cinema.”

Film piracy is estimated to be worth around £200 million per year, and since the Vue management have introduced the controversial detection system there have been no incidents of culprits recording a movie.

But some film fans have been less than impressed with “distracting” and “invasive” devices.

Keith Davies from Musselburgh, recently took his two nieces along to see the latest Harry Potter.

He said: “We paid £40 for our tickets and food and saw no warning of the equipment when we went in.

“Within 15 minutes somebody came in with a camera and was working it around every individual man, woman and child.

“I’m alright with them checking for piracy, but it would be much better for viewers if there wasn’t a camera in your face.

“CCTV is bad enough but this feels very awkward.”

But Ms Rooney claimed her staff were well trained in the use of the goggles, and that staff training was designed to ensure the audience experience was not affected.

She added: “We endeavour to make sure we are not disturbing the experience for our customers. We try to be discreet but of course you may get the odd person who notices you.

“That said it should be no different to somebody just going to the toilet.”